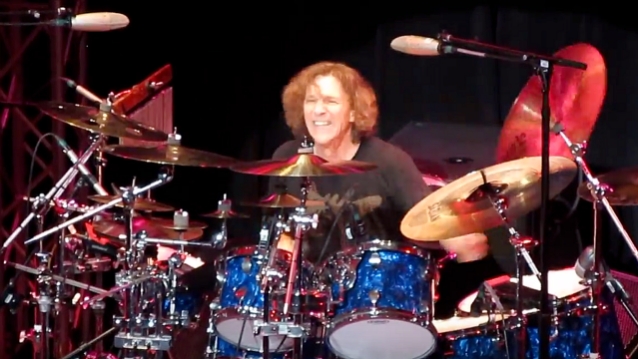 ROD MORGENSTEIN On NEIL PEART: 'I Am Forever Grateful To Have Known This Unique And Special Man'

WINGER and DIXIE DREGS drummer Rod Morgenstein has paid tribute to Neil Peart, who died on Tuesday (January 7) in Santa Monica, California after a three-year battle with glioblastoma, an aggressive form of brain cancer. The iconic RUSH drummer was 67 years old.

Earlier today (Saturday, January 11),Rod took to his social media to write: "Neil Peart was a Renaissance man. Most of us know him as the iconic drummer and lyricist of RUSH. But beyond his exceptional talents in the world of music, Neil's zest for life, thirst for knowledge, and quest for adventure led him down many paths.

"I had the honor and pleasure of meeting Neil in 1985, when the STEVE MORSE BAND toured with RUSH as their opening act on the band's 'Power Windows' Tour.

"Most touring musicians will attest to the absolute joy and excitement of bringing their music to audiences around the globe. Most of these same musicians will also agree on the physical and emotional toll that endless touring can take on a human being. That said, a typical show day often consists of travel, sound checks, meet and greets, interviews, the performance, followed by more meet and greets. Well, as if this is not enough, a typical show day for Neil Peart on RUSH's ‘85/'86 'Power Windows Tour' would usually begin in the wee hours of morning, as Neil would journey on his bicycle from the previous city (assuming said previous city was within 150 miles of the next gig). Neil would often be on his bike for hours, arriving in time for RUSH's sound check. Directly after sound check, he would have dinner, which was immediately followed by a one-hour conversational French language lesson with a local French-speaking tutor. Upon completing his French lesson, Neil would proceed to a private practice room and warm-up on a small drum kit prior to the band's two-hour concert.

"Neil Peart is the textbook definition of 'Carpe Diem'. He truly seized every moment of life to engage in something of importance, be it music, reading, writing, philosophizing, bicycling, motorcycling, trekking through foreign lands, climbing the highest peaks, and devoting himself to family. He is a truly inspiring human being, whose breath of humanity has touched millions around the world. I am forever grateful to have known this unique and special man.

Rod also shared a photo that was taken in 1994 at the Manhattan Center in New York City at a record-release celebration of "Burning For Buddy, Volume 1", a tribute album put together by ‪Peart‬ and Cathy Rich, using Neil's celebrity to bring the music of ‪Buddy Rich‬ and big-band music to a new audience. He wrote: "A dozen or so drummers each performed with the ‪Buddy Rich‬ Big Band. It was one of the most daunting experiences of my life. Exciting AND terrifying."

Neil Peart was a Renaissance man. Most of us know him as the iconic drummer and lyricist of Rush. But beyond his...