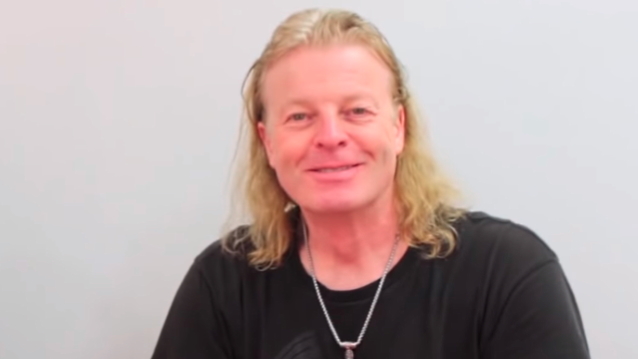 Roland Grapow says that he doesn't understand why the members of HELLOWEEN "still have problems" with him, almost two decades after he was dismissed from the group.

Asked in a recent interview with Brazil's Rodrigo Flausino whether he would be interested in taking part in the current HELLOWEEN reunion that includes both Hansen and vocalist Michael Kiske along with the band's most recent incarnation, Grapow said (see video below): "[HELLOWEEN singer] Andi [Deris] said I'm a betrayer. I don't care what he's saying, but I don't know why he's saying it. I don't know the reason. I thought we had a good relationship, because I met him three years ago, four years ago, twice. We spoke on both days together for hours. And I'm smiling to them, I'm not blaming them that I was fired. But they still have problems with me. I don't know why. Most people that know me [know that] I'm a nice guy drinking beer."

Grapow was originally discovered in a Hamburg, Germany club playing with his band RAMPAGE by HELLOWEEN guitarist Michael Weikath, who kept Grapow's name in mind in the event Hansen would potentially leave HELLOWEEN. Grapow proceeded to complete the touring cycle for the band's classic 1988 "Keeper Of The Seven Keys Part II" album.

Grapow and drummer Uli Kusch were dismissed from HELLOWEEN in 2001 because of disagreements over the direction of the band's "The Dark Ride" album, which saw an increased focus on darker and modern metal elements. Grapow and Kusch formed MASTERPLAN a year later.

In 2017, MASTERPLAN released a studio album titled "PumpKings", featuring reworked versions of HELLOWEEN songs from albums that Grapow played on during his time in the legendary German power metal band.