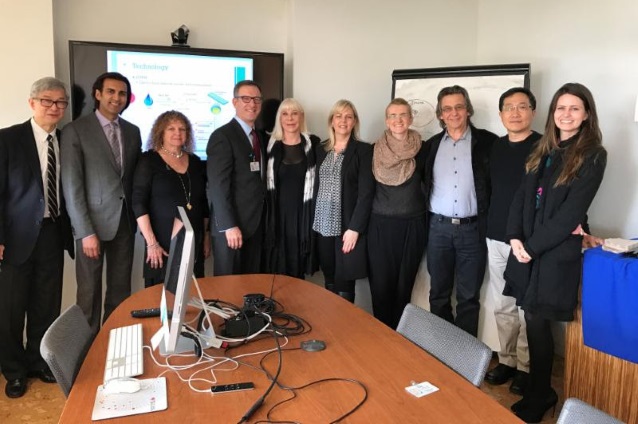 When the Ronnie James Dio Stand Up And Shout Cancer Fund was founded in 2010 in memory of the late heavy metal rock singer, his widow Wendy pledged to raise awareness that would further early detection, prevention and treatment for the deadly disease that took his life. So when the Dio Cancer Fund's Board of Directors became aware of Dr. David Wong's exciting research under the auspices of the UCLA School of Dentistry, they felt they had found a perfect match for Wendy's goals.

The Dio Cancer Fund has raised in excess of $2 million to date through its various annual events and direct support from the vast community of Dio fans worldwide. It is their mission to help eradicate this disease through education and via Wendy Dio's mantra: Early Detection Saves Lives.

Dr. Wong, director of the Dental Research Institute at the University of California, Los Angeles, and his dedicated team of researchers are developing a simple, non-invasive saliva swab test for the early detection of specific cancers, a concept that is tailor-made for the Dio Cancer Fund's mission. Not only does Dr. Wong have an infectious personality, his goal is easy for anyone to understand. He believes this simple test, called a liquid biopsy, can and should become part of any routine physical examination conducted in a primary care physician's office and will be available for such medical use around the world within the next three years.

In addition, being local, Dr. Wong and members of his team have been able to participate in fundraising events sponsored by the Dio Cancer Fund in Los Angeles and directly address and engage with Dio fans while members of the Fund's Board have visited Dr. Wong's laboratory at UCLA for presentations on their latest findings. Dr. Wong famously touts that he has the largest collection of specimens of "spit" (saliva) in the world!

"In the coming year, Dr. Wong's laboratory will be submitting this for regulatory approval with the FDA," explains Dr. Sandy Kapoor, medical director of the Dio Cancer Fund. "Looking forward, the results of this research will bring us one step closer to being able to have this saliva test in doctor's offices."

Dr. Karolina Kaczor-Urbanowicz, Dr. Wong's lead researcher, published a paper on this research in a recent issue of Bioinformatics, a biweekly peer-reviewed scientific journal covering research and software in computational biology. The financial support of the Dio Cancer Fund is acknowledged in the manuscript, and Dr. Wong has stated "Dr. Karolina Kaczor-Urbanowicz's ability to contribute to the future of the oral health profession through research, patient care and community service is due in large part to the generous support from Ronnie James Dio Stand Up And Shout Cancer Fund who believe in our mission." He has also stated that the financial support has already brought his project additional funding.

This was also true when the Fund, then in its early stages, committed some $300,000 over a three-year period to specific gastric cancer research at M.D. Anderson Cancer Center in Houston where Ronnie James Dio was treated for the last six months of his life. The hospital was able to parlay that seed money into multi-million-dollar grants from the National Institute Health (NIH). Additionally, the Dio Cancer Fund donated some $400,000 to the Vanderbilt University Hospital in Nashville to support research for a blood test to detect gastric and esophageal cancers.

The Dio Cancer Fund was founded in 2010 following the passing of the world-renowned voice behind such iconic heavy metal bands as BLACK SABBATH, RAINBOW, HEAVEN & HELL and his own band, DIO. Ronnie James Dio valiantly battled gastric cancer for some six months after a devastating terminal diagnosis, and the cancer fund created in his memory is proud to be associated with ground-breaking research into early detection. Its fundraising efforts have included gala dinners and a tribute album containing songs written by Ronnie James Dio that were recorded and donated by major rock and metal recording artists called "This Is Your Life". The "This Is Your Life" album resulted in a 2015 Grammy win for "Best Metal Performance" for TENACIOUS D (actor/musicians Jack Black and Kyle Gass) and their rendition of Ronnie James Dio's "The Last in Line" from the tribute album.

Additionally, the Fund hosts two annual events, the springtime Ride For Ronnie motorcycle ride and concert and the Bowl For Ronnie celebrity bowling tournament held in the fall. This year's Ride For Ronnie is set for Sunday, May 6 with the Ride originating at Harley Davidson in Glendale and finishing at Los Encinos Park in Encino for an afternoon of live music.