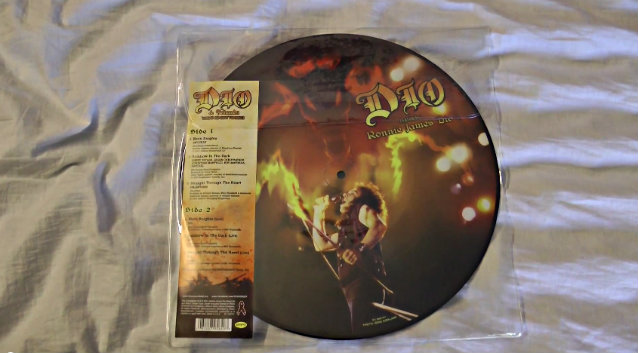 A special limited-edition vinyl release of selections from Ronnie James Dio's "This Is Your Life" tribute compilation was made available from Rhino for Record Store Day, Friday, November 28. The limited release of 5500 units features "Neon Knights" by ANTHRAX, "Rainbow In The Dark" by Corey Taylor, Roy Mayorga, Jason Christopher, Christian Martucci and Satchel and "Straight Through The Heart" by HALESTORM on Side A from the compilation album released on April 1. Side B of the 12-inch picture disk contains the live tracks "Neon Knights", "Rainbow In The Dark" and "Straight Through The Heart" by Dio himself. The disks retail for $18.98.

A seven-minute video overview of the limited-edition vinyl release of "This Is Your Life", courtesy of Vinyl-Blog.com, can be seen below.

"This Is Your Life", a tribute album created to raise funds for the Ronnie James Dio Stand Up And Shout Cancer Fund, features an all-star group of his friends and fans performing 13 of their favorite Ronnie James Dio tracks. The album, released in April by Rhino, has already sold over 100,000 units worldwide.

Produced by Wendy Dio, widow of Ronnie James Dio And Ronnie James Dio Stand Up And Shout Cancer Fund president/founder, "This Is Your Life" includes contributions by such metal heavyweights as METALLICA, SCORPIONS, ANTHRAX, Glenn Hughes and Rob Halford, as well as appearances by many of the musicians who performed with Dio over the years.

To find a participating Record Store Day Store near you, go to link text
www.recordstoreday.com.