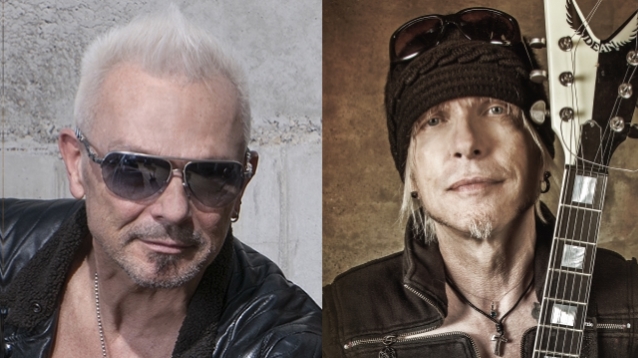 RUDOLF SCHENKER Fires Back At Brother MICHAEL: 'The Only Person That's To Blame Here Is Himself'

SCORPIONS guitarist Rudolf Schenker has responded to criticism from his brother Michael after the former UFO axeman accused him of being a "dangerous bully" who "takes advantage" his younger sibling.

Michael Schenker gave a number of interviews in recent years in which he questioned his brother's integrity, going so far as to call Rudolf "a con artist" who "completely adopted" Michael's image as his own. He also denounced the SCORPIONS for "distorting" the story of his brief tenure with the band and lamented the fact that he gave Rudolf his "portion" of the songwriting credit for the classic SCORPIONS song "Coast To Coast". It all came to light, Michael said, when he was approached to help with the recent 50th-anniversary SCORPIONS reissues.

During a brand new interview with Classic Rock magazine, Rudolf — who is seven years older than Michael — said: "Look, I love my brother. He's a fantastic guitar player but he knows nothing about business. When we made 'Lovedrive' [released in 1979], the band was under contract to Dieter Dierks [producer and manager]. When I asked Michael to play a solo to my composition 'Coast To Coast', we agreed a half-and-half credit, but Dieter wouldn't allow it — this related to publishing and studio costs. Michael had a signed contract with Dieter that gave him one point on the song. And we agreed to pay Michael… he had the money."

He continued: "But in 1985, when [Michael] was completely smashed and had a new MSG with Robin McAuley, Michael lived with me in my house. We flew in musicians, I did all of that for nothing on the understanding that Michael would pay me when a record label came in. But he didn't pay me anything. So I took his half to cover the bills he hadn't paid. Everything is clear. All Michael has to do is ask: 'What's happening here?' But he doesn't; instead, he gives these stupid interviews."

Rudolf added: "I still love my brother but he has always hated business matters and the only person that's to blame here is himself."

Michael Schenker first appeared on "Lonesome Crow", earned acclaim in the 1970s on classic UFO albums such as "Phenomenon" and "Lights Out" before rejoining SCORPIONS for 1979's "Lovedrive". He departed soon thereafter to launch MICHAEL SCHENKER GROUP. And while his sometimes-erratic behavior have derailed parts of his career, Schenker remains one of hard rock and metal's most influential axemen.