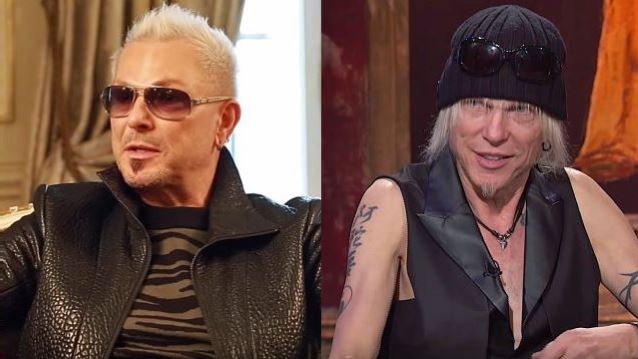 RUDOLF SCHENKER Says He Loves His Brother, Even After MICHAEL Called Him 'A Con Artist'

SCORPIONS guitarist Rudolf Schenker has refused to be drawn into a public war of words with his brother Michael after the former UFO axeman accused him of being "a trick master" and "a wannabe."

Michael Schenker gave a number of interviews in recent months in which he questioned his brother's integrity, going so far as to call Rudolf "a con artist" who "completely adopted [Michael's] image" as his own. He also denounced the SCORPIONS for "distorting" the story of his brief tenure with the band and criticized what he saw as ongoing efforts to minimize the contributions of the group's former drummer Herman Rarebell and ex-bassist Francis Buchholz, as well as SCORPIONS' long-running creative complacency.

During a June 23 interview at the Copenhell festival in Copenhagen, Denmark, Rudolf — who is seven years older than Michael — said that he was aware of the statements that his brother has been making, but that he had no intention of responding to them publicly.

"Some people were sending me stuff [from online interviews where Michael has made some comments]," Rudolf told Nalle Österman of Finland's Etelä-Suomen Media news agency and Iltamakasiini magazine. "But I can say to all these things: I love my brother. He's an outstanding guitar player. That's all what I can say."

Michael Schenker said earlier this year that he was "disappointed" in his 67-year-old brother over the way the SCORPIONS described his time with the band during the writing and recording of the 1979 album "Lovedrive". Michael also claimed that that the SCORPIONS took advantage of him and took credit for his songwriting efforts. It all came to light, Michael said, when he was approached to help with the recent 50th-anniversary SCORPIONS reissues.

Michael told the SiriusXM satellite radio show "Eddie Trunk Live" that he was not interested in reaching out to his older brother to work out their differences. He explained: "My side of the street is clear. I'm just very disappointed. And Rudolf has to figure out what to do with his life. It's on his shoulders. He knows exactly what he did. And so I stay away from him as far as I can, because I don't know what else he's got up his sleeve to justify things. He's a trick master, and he's a wannabe. And that's it. He can do whatever he wants. He can enjoy his life on every level that he wants. But I stay away from him. I'm his younger brother. He's basically bullying me and he's doing with me whatever he wants."