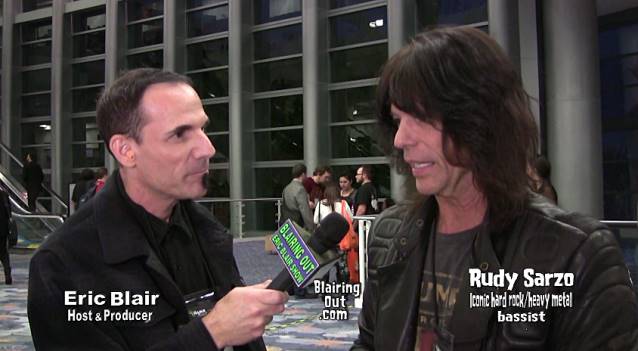 RUDY SARZO: GEOFF TATE Is 'The Finest Composer, Singer, Frontman' Of His Generation

Asked what it is like to perform with Geoff Tate's version of QUEENSRŸCHE, Sarzo said: "Geoff Tate is, to me, of his generation the finest composer, singer, frontman that ever was, of that generation. [He is] a joy to work with, to be in the band, to be in his company, to hear his voice on stage… off stage [as well], because he sings a lot off stage too. And he's got a wonderful band, including my brother [Robert] is in it. And also members of the QUEENSRŸCHE family that have been around for a long time, like Kelly Gray, Randy Gane… all those guys. And also I get to play with my old DIO rhythm section bandmate Simon Wright, so it's a very joyful occasion… It's a family. Absolutely. Otherwise, after a year, we wouldn't [still] be doing this. [Laughs]"

Regarding whether Tate includes him in the songwriting process, Sarzo said: "You know, what happened was, even before we went out on tour, Geoff needed to come out with a record to make a statement. So I played on three tracks [on the 'Frequency Unknown' album], [but] I was not part of the [songwriting] process [because] we weren't a band yet. So hopefully in the future, we'll be part of the [songwriting] process too."