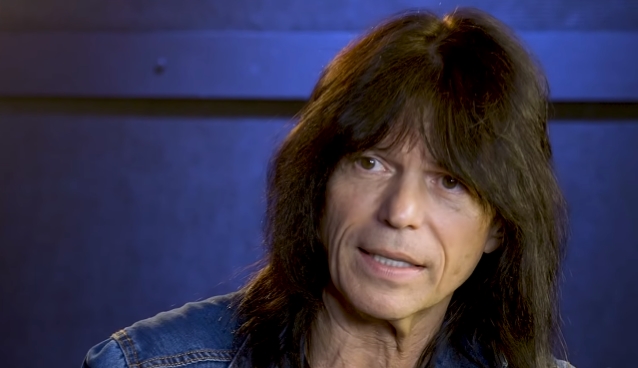 RUDY SARZO Opens Up About His Relationship With RANDY RHOADS: 'I Learned A Lot From Him'

Rudy: "When we speak on his behalf, it carries his name forward, and his memory. "

On joining QUIET RIOT in the late 1970s and meeting Rhoads:

Rudy: "In 1978, I was living in New Jersey and getting ready to go back to Los Angeles, because I had been working out there playing in lounge bands with my brother and my sister-in-law. I got this phone call from Kevin [DuBrow]. He remembered me from meeting him at the Starwood. QUIET RIOT was basically a house band there. I met him and told him when I'd seen QUIET RIOT for the first time how much on track they were, because they had a vision — they were an arena band playing in a club, so they projected. Kevin remembered me, and they tried everybody in town — all the bass players. Somebody kept saying, 'You should get a hold of this guy Rudy.' He called me, and I just happened to be going back to L.A. the following week, so I went in, I auditioned and it was fantastic. We jammed two Johnny Winter songs. Randy was doing all this crazy pentatonic blues, but also with more outside-the-box playing, some classical, using the melodic minor and harmonic minor scales, so it was [a] very unique style of playing."

On Rhoads leaving a lasting impact on rock guitar despite passing away at the age of 25:

Rudy: "The fortunate thing was that we played a lot. We toured a lot. I joined [Ozzy's] band in March of 1981, and he passed away the following year, but within that period, he played in front of so many people, and it's that memory... he had major impact that, to me, transcended what's on the record. One thing is what you hear on the record, and to actually watch him play it live, that's a whole different experience."

Rudy: "I learned a lot from him, because I had never taught before. I asked him, 'Give me some advice here.' Kids were already into VAN HALEN, but also they were Randy fans. That's why they went to him as a teacher. He told me, 'Just do a little bargaining with them. You want to learn this solo from the VAN HALEN song? If you do that, you must also learn these new scales.' He would give them something that would be relative to show why certain things worked from the song, because one thing is to teach somebody something. Another thing is to explain why that is working in the song, so you can apply that to your own creations. I was able to apply that to my own lessons."

On the difference in Rhoads's playing on "Blizzard Of Ozz" and "Diary Of A Madman":

Rudy: "I believe this is what happened — when Randy joined Ozzy, he did not know what to expect as far as the freedom to be creative. Ozzy told him, 'Just be yourself.' Of course, being yourself meant that he had already been in more of a pop diatonic composition band such as QUIET RIOT. There was a huge pop influence that we were going through in the '70s version of QUIET RIOT. A lot of the music that was being written during the QUIET RIOT period was very diatonic. If you break down the structure of songs like 'Mr. Crowley', it's D-minor and F-major. Every single chord in that scale, it's in that song in a circle of fourths, especially at the end during the solo... If you listen to 'Goodbye To Romance', D-major, again, every single chord. 'Crazy Train', A-major, starting in F-minor. He took that — that was good, and iconic songs were written like that, but he wanted more. So by the time he started working on 'Diary', especially 'Diary Of A Madman', I asked him, 'Where'd you get the inspiration for this?,' because it's really outside the box. He says, 'I was watching a documentary about the Holocaust,' and the soundtrack inspired him to write a song with that sort of feel and sound to it, the chord structures. If you listen to, like, 'Believer' and all those songs, especially once it comes to the solo, he really breaks away from the actual tone center of the song. All the solos just become their own little pieces."

On how Rhoads changed after joining Ozzy's band:

Rudy: "The difference between QUIET RIOT Randy Rhoads — not only musically, but his fire, his passion — was basically the same from QUIET RIOT to Ozzy. The last time he played with QUIET RIOT was 1979. Then he went to England, and by '81, we were touring in the States. It had a huge impact. Once he went to England, he became more of a not-L.A.-Sunset-Strip musician. He started becoming more of the new wave of British metal, kind of like when [Jimi] Hendrix left New York... I think if Randy would have stayed in L.A., he... would have been a whole different Randy Rhoads."

The pair can be heard on the Osbourne's 1987 live album "Tribute", the majority of which was recorded at a performance in Cleveland, Ohio during the "Diary Of A Madman" tour in May of 1981.