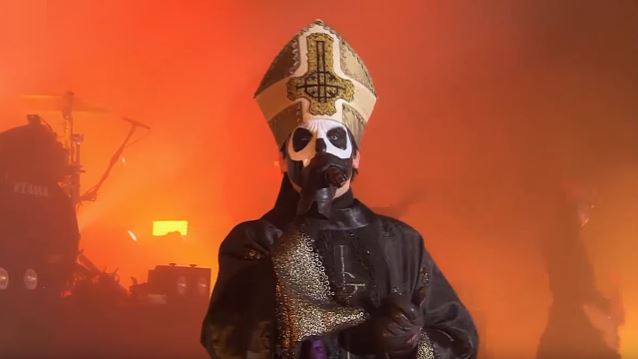 Metal Wani editor in chief Owais "Vitek" Nabi conducted an interview with the leader of the Swedish occult rock band GHOST. You can now listen to the chat in the YouTube clip below.

Asked about GHOST's plans for the follow-up to 2015's "Meliora" album, the GHOST mainman said: "The ideas for the new record will be quote-unquote darker, because it's thematically set in a different… in a darker setting. 'Meliora' was supposed to reflect some sort of utopia/dystopia in the modern society, whereas this new one is gonna be a little bit more apocalyptic, a little bit more back to the medieval times, which, obviously, is associated with darkness. "

He continued: "Obviously, in metal, in extreme metal, you have a myriad of records that are thematically in the Middle Ages, but the idea for this new album is to combine… So where [other] records [covering similar lyrical themes are] drowned and surrounded and drenched in death, it's gonna be a record about survival. So that constantly working with those polar, sort of, elements is also a difference, I guess, between… If you find a black metal record that is about the Plague and the death, you will have only death — everything is just black and everything just ends black. Whereas one of my driving forces writing a record like that is to write a record about the survival of that and the prosperity."

The GHOST leader added: "Yeah, it's gonna be a darker record. Is it gonna be all through and through heavier? I don't know, obviously. But we do have melody and we do have songs that are not so heavy. From my point of view, from where I'm sitting, knowing a little bit of the material coming in, it's gonna be both. It's gonna have everything from heavy, crushing metal to big, ballady anthems."

Asked about the status of the recording sessions for the new GHOST album, the band's mainman said: "Right now we're in the writing phase. As most modern music acts, you tend to record as you write. And we have never been a band that goes into a room and stands in a ring and just jams things; it's more of a… you go into a room and record songs, and when you record it, it sort of comes back and you listen to it and then you do it again. So we're in that phase right now. I'm not done with the record. It's not gonna be recorded until… We're gonna start for real in August. As soon as we come home from the American tour, it's gonna start."

During the Metal Wani interview, GHOST's leader touched on the subject of lineup changes and how they have affected the band's sound over the years.