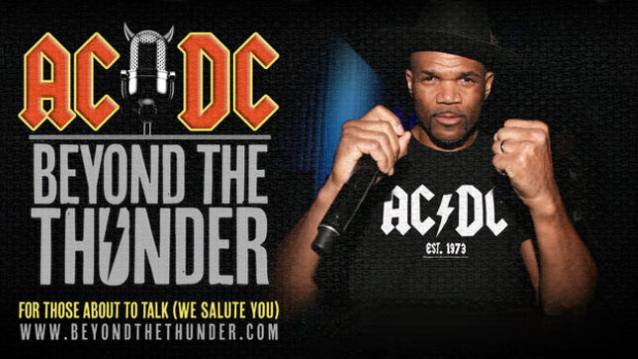 "AC/DC Beyond The Thunder" podcast kicks off its Season 3 podcast with Darryl McDaniels emceeing, the DMC portion of the greatest hip-hop group of all time RUN-DMC.

"I'm honored that I get to talk about AC/DC right now, because... it's my thing," he said.

Sporting his ever-present AC/DC T-shirt while being interviewed from his home in Wayne, New Jersey, the rap pioneer discusses everything from producer Rick Rubin sampling "Back In Black" for the BEASTIE BOYS, overcoming drugs and depression through the power of music, and even a proposal to reunite RUN-DMC to play the Super Bowl halftime show... with AC/DC.

This exciting season opener begins with Darryl's introduction to AC/DC growing up as a catholic kid in Hollis, Queens. "I think I heard 'Highway To Hell' first," listening to KROCK while cruising around town in the late 1970s. "It was an experience," he said. "AC/DC takes you on a ride."

Friends would often refer to DMC as "white boy" due to his affinity for classic rock, a style he would later infuse into the hip hop genre — a first. From "Highway To Hell" to "Raising Hell", McDaniels would catapult his "King Of Rock" aspirations into RUN-DMC, one of the most significant acts in the history of hip-hop.

For McDaniels, AC/DC would always be his rock/rap muse. "When I discovered 'Rock And Roll Ain't Noise Pollution', that flow is way better than fucking GZA from the WU-TANG CLAN," he said. "Nobody beats that. AC/DC was definitive of what rock 'n' roll really, truly is. Everybody else does rock 'n' roll. This band is rock 'n' roll."

Relating AC/DC to rock heroes, the topic turns to discussing how AC/DC and "Iron Man" were the perfect marriage of brands. "For me, rock was like superheroes," pointing to the AC/DC logo on his chest. Heroes being the theme McDaniels has carried throughout his life, whose love for comic books and superheroes saw him launch a line of comics called DMC (Darryl Does Comics).

And although they have not performed together since the murder of founder Jam Master Jay, when asked towards the end of the episode whether RUN-DMC would ever consider reuniting, Darryl serves up a one time offer - involving AC/DC: "Everybody's asked me, 'Why don't me and Run do the Super Bowl… put this out viral... I'll do the Super Bowl — if AC/DC does it," he said.

Darryl McDaniels is a Grammy Lifetime Achievement Award winner and fellow Rock And Roll Hall Of Famer, who has sold over 30 millions albums, and listed as one of Top 100 greatest bands of all time by Rolling Stone magazine. McDaniels received the Congressional Angels in Adoption award for his work with children in foster care and promotion of adoption. He continues to make new music.

"AC/DC Beyond The Thunder" was created by duo Gregg Ferguson and Kurt Squiers, who both quit their jobs and set out to capture a feature-length documentary as the ultimate homage, but failed to secure the band's approval. Ferguson and Squiers then decided to unearth these stories of well-known fans discussing their affinity for AC/DC and harness that energy into a podcast with the help of sound engineer Eric Kielb. From archival interviews to all new guest episodes, "AC/DC Beyond The Thunder" is now in its third season with over 150,000 streams.