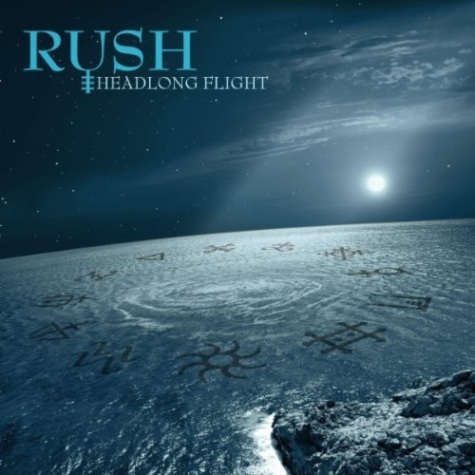 The official lyric video for the single can now be seen below.

"'Headlong Flight' was one of those songs that was a joy to write and record from beginning to end," frontman Geddy Lee says. "Alex [Lifeson] and I had blast jamming in my home studio one day before the second leg of the Time Machine tour, and I did not revisit that jam until a year later. Alex and I assembled the song to be an instrumental and its original title was 'Take That Lampshade Off Yo Head!", but once we saw the lyrics Neil [Peart] had written, I knew that the spirit of the lyrics matched the instrumental perfectly and it was just a matter of making them fit and writing the melodies."

RUSH's first new collection of original material in over five years and their first studio release via Anthem/Roadrunner Records, "Clockwork Angels" will be released on June 12.

The recording of "Clockwork Angels" began in April 2010 with Grammy Award-winning producer Nick Raskulinecz (FOO FIGHTERS, DEFTONES) — who also collaborated with the band on their last studio album, 2007's "Snakes & Arrows". RUSH co-produced both records. The first two songs, "Caravan" and "BU2B", were completed during that first session at Nashville's Blackbird studios and performed nightly during the wildly successful Time Machine Tour, which ran from June 2010 to June 2011. Work on "Clockwork Angels" resumed in the fall of 2011 at Revolution Recording in Toronto after the tour's finale, with additional strings (arranged by David Campbell) recorded at Hollywood's Ocean Way Studios earlier this year. Lyrically, "Clockwork Angels" chronicles a young man's quest across a lavish and colorful world of steampunk and alchemy as he attempts to follow his dreams. The story features lost cities, pirates, anarchists, an exotic carnival, and a rigid Watchmaker who imposes precision on every aspect of daily life. The novelization of "Clockwork Angels" is being written by science fiction writer Kevin J. Anderson in collaboration with RUSH drummer and lyricist Neil Peart.