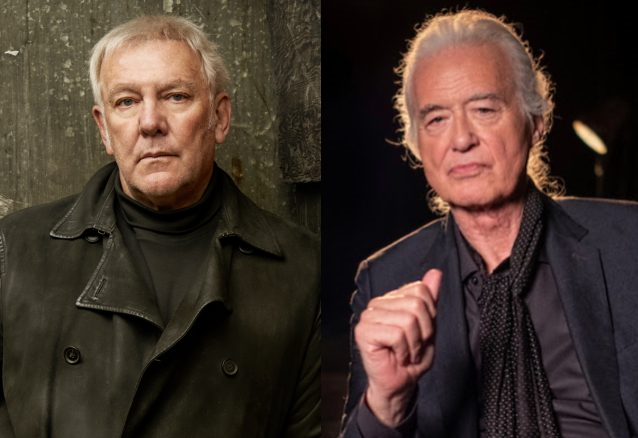 In a new interview with Guitar.com, RUSH guitarist Alex Lifeson was asked if he has ever been "star-struck" while meeting someone famous over the course of his career. He said: "There were many times. But one that really stands out for me was in 1998. Geddy [Lee, RUSH bassist/vocalist] was on a trip to Morocco and he met [LED ZEPPELIN singer] Robert Plant, as they were staying in the same hotel. But it wasn't until the last day that they acknowledged each other; they'd sorta pass each other in the hall and kinda smile and nod their heads. On that last day, Geddy said to his wife, 'I've gotta go over and just thank him for what a great inspiration he was for me growing up as a musician.' He went over to his table — you know, we're always uncomfortable to do something like that — and he said, 'Excuse me, Robert, I just wanted to say…', and [Robert] said, 'Oh, Geddy! Do sit down, let's have a glass of wine! Finally, I was waiting for you to come round!' The following day when they saw each other, Robert said, 'We're going to be in Toronto later this summer. Bring Alex down to the show. It would be great to see you.' So we went down. We went up to the elevator, up to the dressing-room floor, and we were chatting with Robert. He's such a wonderful person. During the conversation he says, 'Hang on, I'm just gonna go get Jimmy to come in and say hi.' And I was like [gasping, shaking and stuttering] '[LED ZEPPELIN guitarist] Jimmy Page? You mean Jimmy Page?' I couldn't believe it. He came in the room. I was so nervous. But he was so gracious and so nice. This is when I discovered it's always a bigger deal in your own mind than it is when you meet somebody."

Lifeson previously discussed his meeting with Plant and Page during a 2009 interview with Guitar World. He stated at the time: "Of any guitarist, Jimmy Page was my biggest influence. I wanted to look, think and play like him. ZEPPELIN had a heavy influence on RUSH during our early days. Page's loose style of playing showed an immense confidence, and there are no rules to his playing.

"I met Page at a PAGE/PLANT concert in Toronto in 1998. I was acting like a kid, all googly eyed. I was freaking out and my hands were shaking. I was so thrilled to meet him because his work meant so much to me."

In the Guitar World interview, Lifeson also named LED ZEPPELIN's "Kashmir" as one of the songs that shaped RUSH's sound.

"This is an absolutely brilliant song, an all-time classic," Alex said about "Kashmir". "'Kashmir' has such a wonderful, exotic Middle Eastern feel to it — it's like no other song of its era — and 'Physical Graffiti' is a mind-blowing album. In a roundabout way, 'Kashmir' influenced 'A Passage To Bangkok', which has a similar sort of odd-tempo arrangement to the verses."

Alex is currently promoting ENVY OF NONE, his new project in which he is joined by Andy Curran (CONEY HATCH),Alfio Annibalini and singer Maiah Wynne.