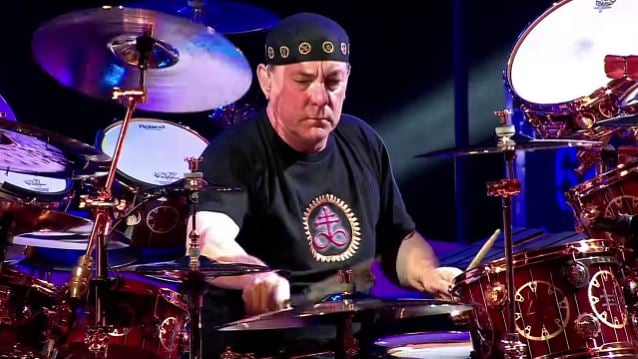 RUSH's NEIL PEART Talks Retirement: 'Like All Athletes, There Comes A Time To Take Yourself Out Of The Game'

According to RushIsABand.com, RUSH drummer Neil Peart is featured in the November/December 2015 issue of Drumhead magazine for an interview where Neil reflects on 50 years of hitting things with sticks. In one passage from the interview, Neil talks about how he now considers himself a retired drummer.

He said: "Lately, [my five-year-old daughter] Olivia has been introducing me to new friends at school as 'My dad — he's a retired drummer.' True to say — funny to hear. And it does not pain me to realize that, like all athletes, there comes a time to... take yourself out of the game. I would rather set it aside then face the predicament described in our song 'Losing It' ('Sadder still to watch it die, than never to have known it')."

Peart recently admitted to being "of two minds" about another lengthy run of concert dates, pointing out that having a young child at home makes it difficult for him to be gone for weeks at a time.

"I've been doing this for 40 years — I know how to compartmentalize, and I can stand missing her, but I can't stand her missing me and it's painful and impossible to understand for her. How can a small child process that? And there's the guilt that comes with that — you feel guilty about it, of course. I'm causing pain."

RUSH bassist/vocalist Geddy Lee revealed last month that he and his bandmates are "not able to agree on doing more tours." He added: "I love touring, and I'm ready to go on very short notice. But my life is simpler than my partners' lives. And Neil has a complicated life — he has a young daughter, a new family that he really feels pain to leave, and I understand that. And he has physical issues when you play like a monster for three hours and the body is not cooperating with him, and it's very hard for him. And he pays a price. Like, there are times when you see him backstage in the middle of a tour and he's really suffering. So he's not sure he's got the fortitude to continue playing like that. But maybe there's an answer down the road, after some time. And that's why we're trying not to be hasty and making any big conclusions. We'll just let everybody be and everybody find their center and see if we can come together with some plans."