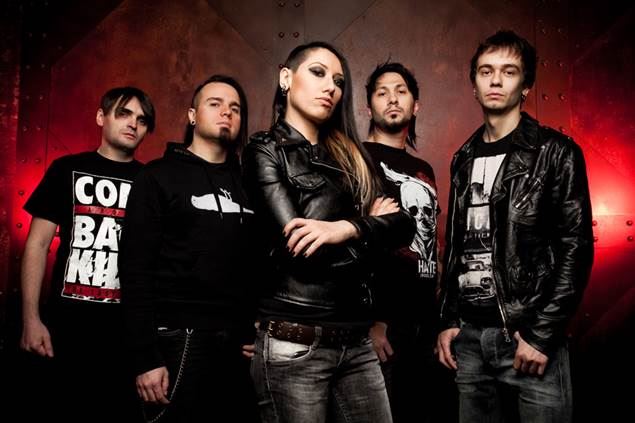 Russia's LOUNA Releases 'Up There' Video

Female-fronted Russian hard rockers LOUNA have teamed up with VEVO, the world's leading all-premium music video and entertainment platform, to bring fans their brand new, eye-opening music video for the track "Up There", cut from their most recent full-length release, "Behind A Mask". The clip was directed by Svyatoslav Podgaevsky with STG Cinema.

"Up There" is intended to enlighten the listener, inviting them to question their surroundings and society. The lyrics of the track mirror the imagery in the video — people of all classes, ages and backgrounds — staring at the sky while nothing but rain pours down on them. People just waiting for a sign, a change, an answer — looking to the clouded sky for help, for light. But sadly, there is no answer. No one there to answer their calls and their cries. The people dream of a better day, but there is no end in sight to the constant oppression, violence, manipulation and deceit being fed to them by those who wish to control them.

This message is clearly conveyed in the lyrics to "Up There", which perfectly describe the bleak, yet hopeful images portrayed in the music video.

LOUNA's reputation extends beyond their musicality to include the focus of their personal passions as found in their lyrics and actions. They are the most commercially successful rock band of the modern protest movement (of which PUSSY RIOT has become the most internationally renowned). They donated their song "The Time of X" to the White Album project raising funds for PUSSY RIOT's support and defense. MTV USA came to Moscow in October of 2012 and featured LOUNA in a documentary about protest music around the world called "Rebel Music".

Formed in 2008 by TRACKTOR BOWLING lead singer Lousine Gevorkian and bassist Vitaly Demidenko, the idea behind LOUNA was to pursue wider musical ideas that didn't fit in with their original band. They recruited guitarists Rouben Kazariyan and Sergey Ponkratiev, and drummer Leonid "Pilot" Kinzbursky. After the release of their first EP, which lyrically focused on the many modern social problems that exist, they were quickly named the aforementioned 2009 Best New Artist of the Year at the annual Russian Alternative Music Prize (RAMP) awards.

They released their first album, "Let's Get Louder" in December of 2010, selling out every venue during their first national tour of Russia supporting the album. Two singles, "Fight Club" and "Let's Get Louder" reached #1 on the Russian radio charts, with "Fight Club" remaining in the top 10 for a record-breaking 16 weeks and also being named the 2011 Rock Song of the Year at the annual Nashe Awards. Along with this, LOUNA was nominated for Breakthrough Artist and Solo Performance of the year. Their second album, "The Time of X", released in February of 2012 has already produced a #1 single, "Mama", and their most recent single "People Looking Up" entered the Russian chart in the top 10.

LOUNA has performed on the main stage at every major festival throughout Russia. Earlier in 2012, they were invited to perform as one of the main headliners at the 50th-birthday concert festival honoring Russian rock legend Victor Tsoi of the band KINO, playing to audiences of over 15,000 people in both Moscow and St. Petersburg.