Swedish metal heroes SABATON will return next year for a North American "The Last Tour" headlining trek. The tour will kick off on April 20 at The Trocadero in Philadelphia, hit seven Canadian cities plus Chicago, Anaheim, Dallas, and conclude at the The Fillmore in Silver Springs, Maryland on May 22.

"Finally, after four tours in a row supporting other bands, the time is right for us to turn the tables and headline," comments SABATON bassist Pär Sundström. "We have seen the fans reactions and now we feel confident that we cannot just pull this off, but we can do it in great style!"

Tickets are now available for purchase exclusively at EnterTheVault.com. Also available are a very limited number of VIP post-show meet-and-greets which include a poster and a shirt. All other outlets will have general admission tickets available on November 12.

Confirmed dates for the SABATON 2017 North American tour are as follows:

SABATON's eighth album, "The Last Stand", was released on August 19 via Nuclear Blast. The follow-up to 2014's "Heroes" was once again produced by Peter Tägtgren (PAIN, LINDEMANN, HYPOCRISY) and it "marks a brand new chapter in SABATON history," according to a press release.

Thobbe stated about his decision to exit SABATON: "I have in recent years become more aware of what would make me feel real happiness and content, and that is to expand my own creativeness in combination with a somewhat stiller life, where I will not tour all year round at the speed of light." 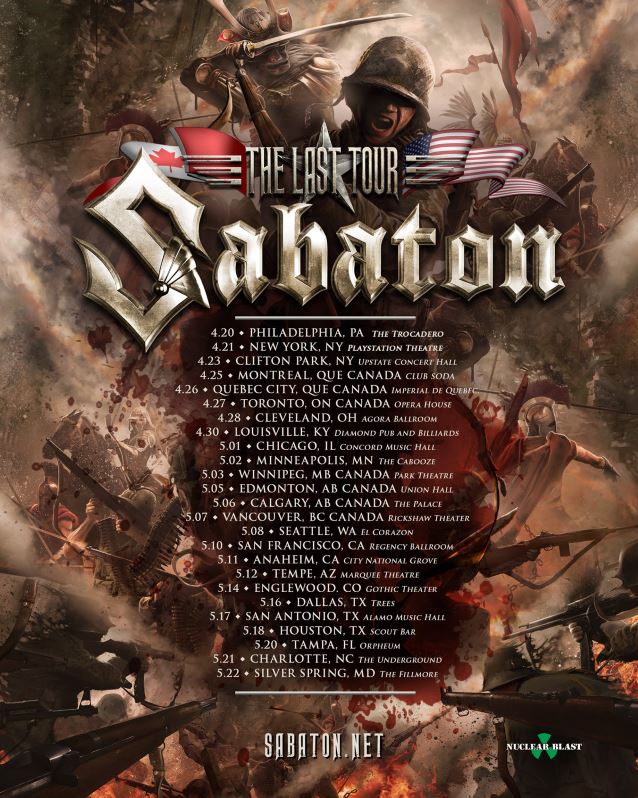