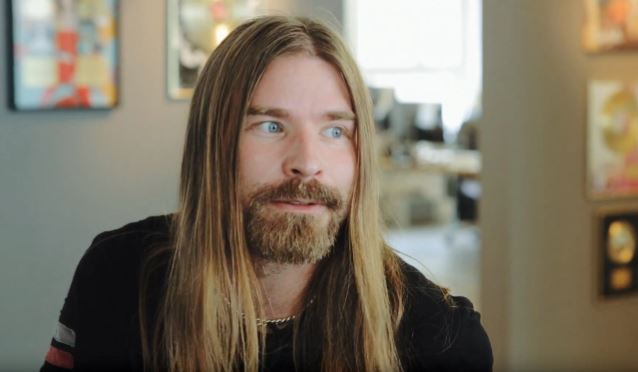 Sebastiano Mereu of From Hero To Zero recently conducted an interview with bassist Pär Sundström of Swedish metallers SABATON. You can now watch the chat below. A couple of excerpts follow (transcribed by BLABBERMOUTH.NET).

On how the digital music revolution has affected SABATON:

Pär: "You know, I think we came in the right time for this, 'cause we came in a time when we were interested in that too. I was a lot into computers before starting the band, so I was following the development of the Internet and stuff like that. At the age of 13, I was building servers and connecting them to Internet and writing my own software for that. And that was that time. And a couple of years later, the Internet started to provide, like, 'Oh, you can actually download some music here.' I found it very interesting, even though at that time I was buying tons of CDs all the time and stuff, but it was still exciting to see what you could do with it. So I was following the scene very closely. And we never felt… SABATON was never a big band before this whole thing changed, the music scene, so we have only seen the possibilities of using this, and we have used it. So while we have a lot of colleagues who have lost sales and no longer see their hundreds of thousands or millions of sales that they had in the past, we never had that. So every album for us is better and better. So I've seen the change, I've been part of it, and I find it very exciting. There's no way to change it. I think the most stupid of all things was the people who tried to fight against it instead of evolving towards it. 'Cause if this can be seen as one of the biggest revolutions that ever happened in the world, you have billions of people who want something, and then you have only very, very few who try to stand against it, try to prevent people from getting what they want. And since when [does] that happen? You need superior a lot if you wanna be just a few people who try to control billions, you know. It's not gonna work. So I think that a lot of labels and a lot of managers and a lot of people, they were too old. If they would have been growing up in times, seeing things… being part of this thing as we were, the music industry would have adapted much quicker and learned a way to earn money from it, 'cause there should be."

On why SABATON continues to make concept albums in an age when streaming is the most popular way to consume music:

Pär: "I think it has a lot to create an interest in the listener, to make them want to have more than just one song. You have to have passion about it. You have to deliver in a nice way where people can enjoy not just a song on the radio or a song on whatever, but they can also see, touch, hold nice artwork that connects, that creates something. 'I want to hear what's on this.' 'I want to read what it says there.' So that should be one point maybe why SABATON sells CDs, vinyls and stuff like that — 'cause I think we create an interest. But, of course, seeing the development of music that it goes towards that a lot of people just take bits and pieces… 'I don't like that song, so I'm not gonna pay for that. I'll take this, this and then I'm happy and I'll make my playlist,' and stuff [like that], it's not so smart to make concept albums. But maybe we are just doing because we love it too. And sometimes you love stupid things, right? And sometimes it will not always be the smartest move."

SABATON's new album, "The Last Stand", will be released on August 19 via Nuclear Blast. The follow-up to 2014's "Heroes" was once again produced by Peter Tägtgren (PAIN, LINDEMANN, HYPOCRISY) and it "marks a brand new chapter in SABATON history," according to a press release.