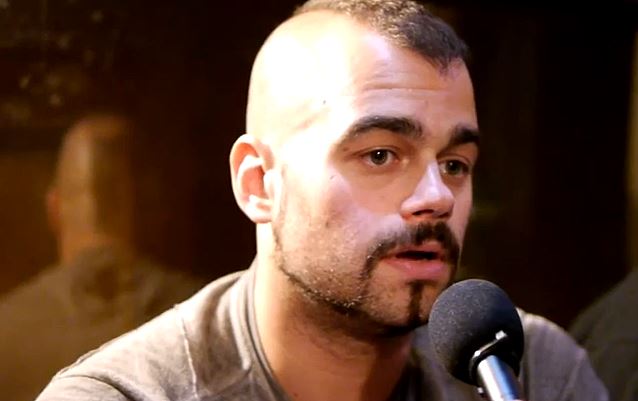 Zisis Petkanas of Greece's Rock Overdose recently conducted an interview with vocalist Joakim Brodén of Swedish metallers SABATON. You can now listen to the chat using the audio player below.

SABATON will release its new DVD and Blu-ray, "Swedish Empire Live", on September 20 via Nuclear Blast. The disc features the band's live performance at the renowned Polish Woodstock Festival in 2012, where over half a million fans had gathered to watch SABATON in action. Besides this main feature, the first-ever SABATON live offering also features even more live footage of the band's performances in Gothenburg, London and Oberhausen on their extensive "Swedish Empire Tour".

"Swedish Empire Live" will be made available in the following formats:

SABATON's latest album, "Carolus Rex", was recently certified gold in Poland for sales in excess of 10,000 copies. The band was presented with gold plaques during their signing session in Warsaw. The CD was also certified gold in Sweden for sales in excess of 20,000 copies. (Note: The International Federation of the Phonographic Industry [IFPI] in Sweden has revised the sales requirements for albums to reach gold status in the country twice in the last 11 years — from the pre-2002 level of 40,000 to the current 20,000.)