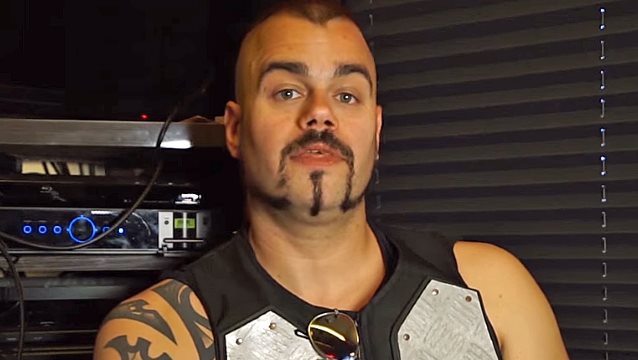 Swedish metallers SABATON will enter the studio in April to begin recording their new album for a tentative fall release. Asked if the songwriting process has changed since the addition of SABATON members Thobbe Englund (guitar), Chris Rörland (guitar) and Hannes van Dahl (drums), vocalist Joakim Brodén told Bucketlist Music Reviews: "Not that much. To be honest, though, at this point, I'd say there's more involvement from the other bandmembers. Not only are they excellent musicians. but at least two of them have experience as songwriters from earlier bands. That being said, some people don't like to admit it, but just because you play an instrument very well doesn't automatically make you a songwriter. It's like saying you can build a house because you have a hammer and some nails. There's much more to writing a song than just playing your instrument. In this case, we've very lucky because, by the time this album is released, everyone in the band will have been involved in the songwriting process in one way or another."

Brodén made it clear, however, that the lyrics to SABATON's upcoming album will once again be written by him and the band's bassist, Pär Sundström. He said: "[Pär and I are] the history nerds in the band. The other guys appreciate singing about history more than dungeons and dragons for sure, but I wouldn't send them to do a history quiz. [Laughs]"

As for the musical direction of the new SABATON material, Joakim told Metal Wani: "It's a mix of [the familiar SABATON style and some new elements]. It's the hardest line to walk there is, because if you take too big of a step, you are disappointing yourself and the fans, I guess, and if you do not have the guts to take any step at all, you're also gonna disappoint yourself and the fans."

He continued: "We never set out to change in a specific direction. I mean, we always have some odd songs on some albums — let's say 'Cliffs Of Gallipoli', which is our SAVATAGE-meets-MEAT LOAF-meets SABATON piano thing. And I think it's cool, as long as it's within the realm of rock music. Some songs are a bit harder than normal; some songs are a bit softer than normal. We said, 'Instead of focusing on go harder or slower, let's focus on be better.' And better sometimes means harder. Better sometimes means softer."