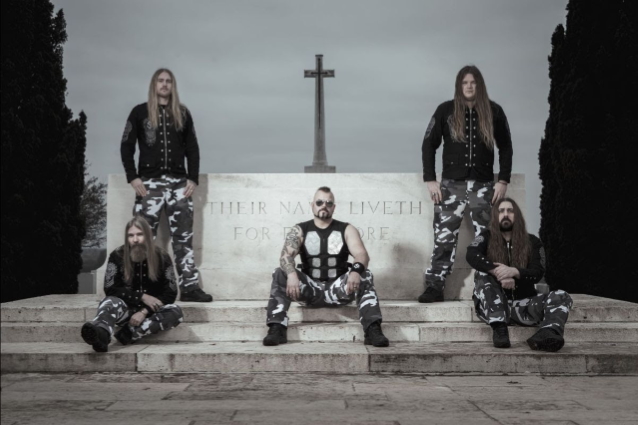 In May 2019, after hearing about the plight of the Heugh Battery Museum which was in danger of permanent closure due to a lack of funding, history-obsessed Swedish metal band SABATON instigated a charity initiative, raising over £4000 from the sales of a specially designed t-shirt and putting the museum's crowdfunder well over their target.

Until now, the band has not had the opportunity to visit the museum in person, but is planning to finally make the trip on Thursday, March 3, on the eve of the release of its latest album, "The War To End All Wars".

On hearing of the band's plans to visit, Heugh Battery Museum manager Diane Stephens invited them to fire the Ordnance Quick Firing 25-pounder, an original British field gun from WWII which is kept at the museum. It is used on ceremonial occasions and at public events as a saluting gun and fired only on very special occasions such Remembrance Sunday, Armed Forces Day, Bombardment Commemoration Day, and to mark the Queen's Jubilee.

"SABATON have been a huge support to us in our fundraising efforts and for that we hope to show our gratitude," says Stephens. "We really believe that their music brings history to a wide audience who then become visitors to the museums of the world — so they support many museums, not just us."

Diane continues: "This is a huge achievement and one which should be acknowledged and applauded. Being invited to fire our gun is a gesture of our appreciation of the band and their attitude to keeping history in the minds of those who may not otherwise engage with these momentous historic events and figures."

The honors of firing the gun will fall to guitarist Chris Rörland, himself a veteran of the Swedish army, having served in the A9 Artillery Regiment in Boden Garrison. He will be the first non-British army veteran to fire the gun.

The museum stands on the site of the only First World War Battlefield in the U.K. It is designated an official battlefield as the guns there were engaged in shore to ship combat on the morning of December 16, 1914, when three ships from the German fleet opened fire and bombarded the towns of Hartlepool and West Hartlepool. The site was decommissioned by the Ministry of Defence in 1957, and slowly fell into disrepair. A small group of volunteers recognized the significance of the site and acquired it from the local authority in 1999. With support from the national lottery, other funders and local businesses the museum opened in 2008. The site is now protected with scheduled monument status. The museum is dependent on the money it earns from admissions and the café on site, and kind donations from businesses, the public and Swedish heavy metal bands.

"The War To End All Wars" will be released on March 4 via Nuclear Blast.