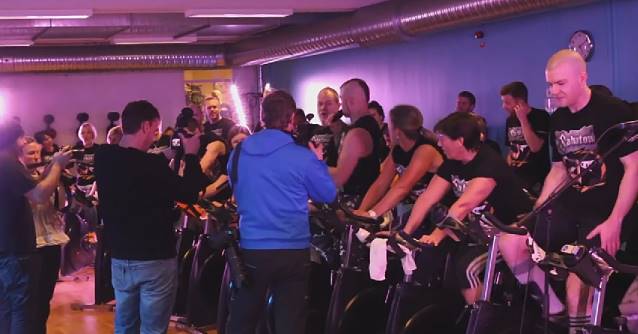 On January 25, Swedish metallers SABATON played a special gig at the Må Bättre gym in Falun, Sweden. They performed live during a spinning class, while simultaneously participating in the workout themselves.

Official video footage of this special event can be seen below.

"We made special mic holders in order to be able to position them on the spinning cycle," SABATON vocalist Joakim Brodén told the Dala-Demokraten newspaper prior to the performance. "Everyone, apart from our drummer, Hannes [Van Dahl], will [actively participate in] the class."

"Heroes" wasrecorded at The Abyss, the recording studio in Pärlby outside Ludvika, Sweden owned and operated by record producer and musician Peter Tägtgren (HYPOCRISY, PAIN).