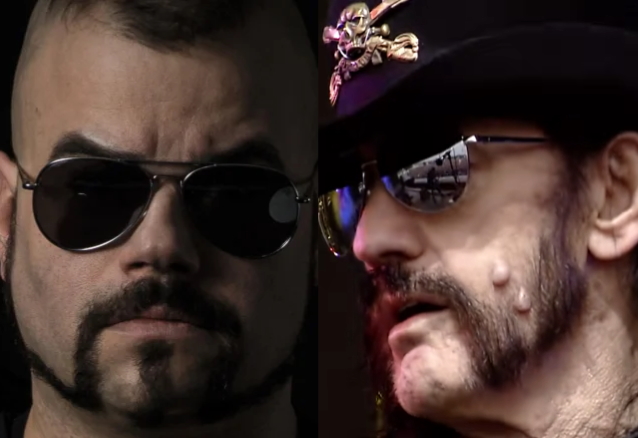 During a recent interview with Germany's Metal Hammer magazine, SABATON singer Joakim Brodén was shown covers of several old issues of Metal Hammer and was asked to comment on each one. When he saw a cover featuring iconic MOTÖRHEAD frontman Ian "Lemmy" Kilmister, Joakim said: "I met him the first time [in] 2005 or '03 at the Sweden Rock Festival. I saw him coming. I was standing in the backstage bar. He was coming up and about to order a drink. And I knew he liked the Maker's Mark whisky. I mean, he likes Jack Daniel's, and that's what he usually drinks, but he also liked the Maker's Mark. So I ordered him a double from the other bar, and when he got it, the bartender sort of showed [to Lemmy], 'It's from him.' So he came up and we talked for a while. And he taught me a lesson about being an artist. That was being very nice and polite even though you don't know the person. And we spent the time drinking. I was telling him, 'You don't have to stand here and hang out with me all the time.' And he was, like, 'I think it's a nice thing. You bought me a nice whisky. And I'm having a good time.' So I asked him, sort of, 'What do you mean?' [He said], 'Yeah, I can spend the time to drink the whisky that you bought me with you. Or I can say no.' It was a pretty gentleman kind of thing to say. Then I asked, 'What would happen if I would have been an asshole?' And he was, like, 'I can drink whisky really fast.' [Laughs]"

SABATON's tenth studio album, "The War To End All Wars", will be released on March 4 via Nuclear Blast Records. Written and recorded during the COVID-19 global pandemic, the concept album of 11 brand-new songs once again dives deep into the atrocities, miracles, and events tied to the early 20th century's World War I. The tenth album of the Falun-based five-piece will be available in an impressive variety of exclusive formats, including CD, vinyl, and cassette, with most available in limited editions.