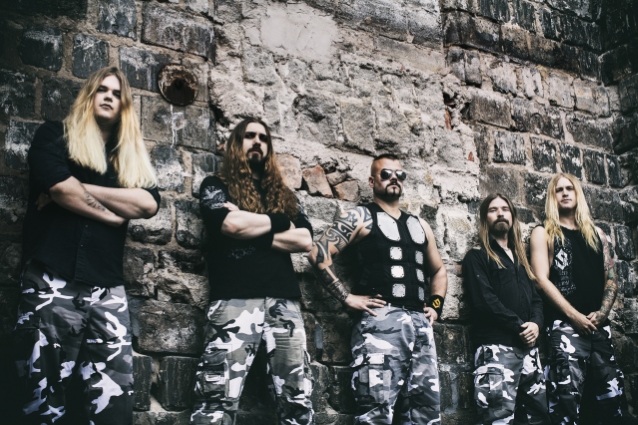 SABATON To Release Next Studio Album In 2019

SABATON singer Joakim Brodén has confirmed that the band is planning to release the follow-up to 2016's "The Last Stand" LP in 2019. "Obviously, we're gonna start making that album — well, we already started, actually, songwriting; songwriting never stops for us," he told Greece's "TV War" in a new interview (see video below). "But, of course, next year there will be an album. We're not gonna get old and start taking eight years between albums."

Regarding the longer-than-usual wait for a new SABATON record, Joakim said: "The thing is, ['The Last Stand'] tour has taken us almost everywhere. Before, we didn't play so much in South America and in North America and also Asia, so back in those days, we were done with the touring in time to do an album every two years. Now, since we are playing in Australia, North and South America and Asia as well, it, unfortunately, delays it a bit. But, yeah, we're not gonna be a band who releases an album every eight years."

Asked if SABATON already has some ideas for a possible concept for the next studio album, Brodén said: "We have a lot of concept ideas, actually. The trick is we never know what we're gonna use. I mean, we've done that in the past and we said what we were planning to do, and then we changed our minds at the last minute and people were disappointed. So, I'm not trying to be secretive — we have probably 20 or 30 ideas that we're always working with, but at the end, we don't really decide until we have half of the songs written. We see what language, what kind of message is the music bringing. And you can't really sing about futuristic warfare if the songs sound old. It's kind of important to us that the music and lyrics fit well together."

SABATON's next disc will be the group's first with guitarist Tommy Johansson (GOLDEN RESURRECTION, REINXEED),who replaced Thobbe Englund in 2016.

SABATON's 2012 album, "Carolus Rex", was recently certified quadruple platinum in the band's home country of Sweden. The concept effort — which is the group's biggest success to date — charts the rise and fall of the Swedish Empire, in particular the life of Charles XII ("Carolus Rex") who ruled it for 21 years. In an amazing coincidence, the album's quadruple platinum certification came exactly 300 years after the king's death in 1718.

To celebrate the album's success, and to commemorate the Swedish king who inspired it, SABATON will release a special 300th-anniversary edition of "Carolus Rex" on November 30, which is the date Carolus Rex was killed in Norway.