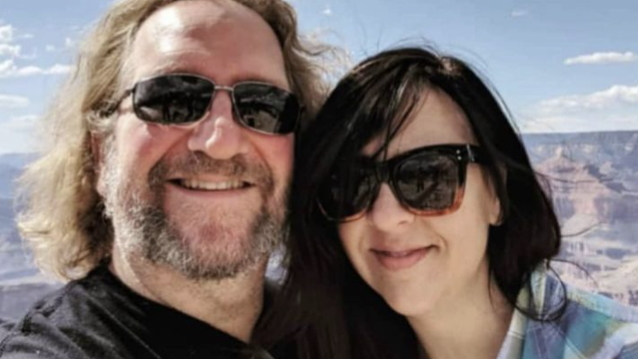 SACRED REICH frontman Phil Rind has launched a GoFundMe campaign for his wife Sandy who is facing a long recovery after suffering a brain injury.

In his introductory statement on the GoFundMe page, Phil wrote: "On Monday morning, March 22nd I went into our bedroom to wake Sandy up. She was unresponsive. I dialed 911 and they rushed her to the hospital. She was in septic shock and suffering from hypoxia (lack of oxygen). Her blood pressure was crashing. Her brain, heart, kidneys and liver were not working. Her entire body was shutting down. Sandy was pretty close to death. The neurologist didn't think she would wake up. Sandy spent two weeks in the ICU. She was in very critical condition.

"After a week, to the surprise of the neurologists, Sandy did wake up! For us it was nothing short of a miracle.

"Sandy has been a critical care nurse for over 15 years. She has worked in trauma, ICU, rapid response team, Neuro ICU and the ER. She is a total badass! She has been saving lives and caring for others for a long time. Her strength, courage and compassion have guided her life. I believe those same traits helped her to survive.

"Sandy has been in the hospital for six weeks so far. She will be moved to a rehab facility when she leaves the hospital. Extensive physical, occupational and neurological rehab will be required.

"For the time being Sandy needs complete care. She is speaking a bit but it is difficult. She cannot feed herself and is on a puree diet. She will need to relearn how to walk.

"The positive news is that Sandy IS improving, but still has a very long way to go. Progress will not be measured in days or weeks, but months and months.

"We are reaching out for help with the mounting medical bills and for what will be a long, arduous road to recovery.

"We greatly appreciate anything you can give. No donation is too small. We know a lot of people are struggling right now.

"Thank you for your kindness, generosity, love and prayers. None of us can make it alone.

"Hug and kiss your loved ones. Everything can change in an instant.

Phil and Sandy celebrated their 27th wedding anniversary on March 12.

Prior to the start of the pandemic, SACRED REICH had been touring in support of its comeback album, "Awakening", which arrived in August 2019 via Metal Blade Records. The band's first LP in 23 years marked SACRED REICH's debut release since the return of drummer Dave McClain.