Former SKID ROW/SAIGON KICK drummer Phil Varone has signed an endorsement deal with Rockett Drum Works, Inc. Varone, who is about embark on a tour with the resurrected SAIGON KICK has also made quite a name for himself in the comedy world. In addition, Phil was the focus of a shocking documentary "Waking Up Dead" that profiled the life of a touring drummer wrapped up in the trappings of rock stardom during the SKID ROW years.

"Phil was my buddy on the POISON/SKID ROW tour several years ago," says Rockett Drum Works President and POISON drummer Rikki Rockett. "This was a guy who repeatedly abused himself and still came on stage and did an amazing job every night. Now that he is sober, the sky isn't even the limit!"

Phil will take a custom Rockett Drum Works all maple kit finished in silver glass glitter on the SAIGON KICK tour this summer.

Rockett Drum Works, Inc. is an American drum company owned by Rikki Rockett and staffed by drummers who pride themselves in high-quality, ultra-custom drums. 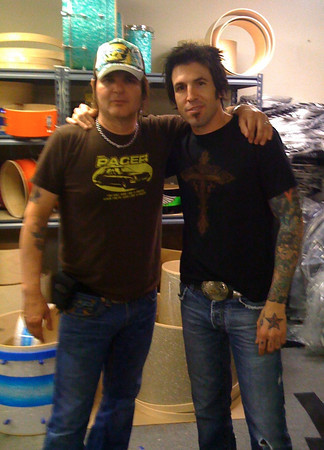