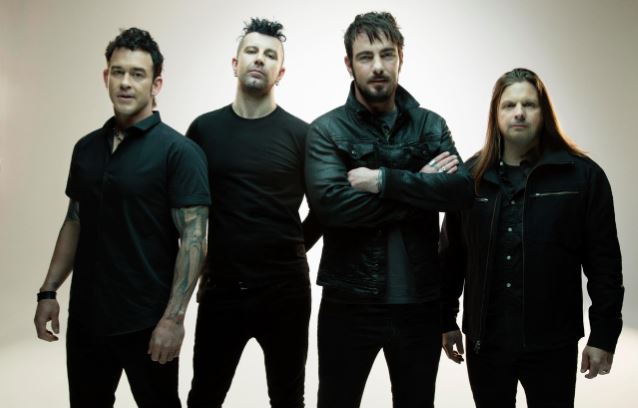 "Fairytale", the new video from SAINT ASONIA, the act featuring ex-THREE DAYS GRACE frontman Adam Gontier and STAIND guitarist Mike Mushok, can be seen below. The song is taken from SAINT ASONIA's self-titled debut album, which came out in July 2015.

SAINT ASONIA is continuing work on its sophomore album, tentatively due before the end of the year. Gontier told Meltdown of Detroit, Michigan's WRIF 101.1 FM radio station back in February that the band was "about halfway done, meaning the writing process is pretty much done. Right now, we're just in the stages of demoing what we, as a band, believe are four or five of the best tracks that will be on the record, that we feel are the best tracks, that we are most happy with. And as well, we're looking into producers and whether or not we're actually going to hire a producer to produce this record."

He continued: "Between myself, Mike Mushok and [SAINT ASONIA bassist] Corey Lowery, we've all done some producing in our day, and at this point, a producer isn't one hundred percent necessary. So we're kind of going through the motions of that and trying to decide what the next step is in the way of production and where we're gonna go to record the record. But as for the songwriting, it's pretty much done, and we're having a really good time putting the finishing touches on the music we've got so far."

Asked how important it is for a rock band in 2017 to work with a producer, Gontier said: "I've been really fortunate to work with some really great producers — Howard Benson and Don Gilmore, and a whole bunch of different guys. I think as a young band, it's very important, because as a young band, you're very influential and you definitely need that outside ear to help you move along and help you decide the direction of where you wanna go as a young band. In our case, just because we've done it so many times and we've made quite a few records between all of us, it's one of those things that we feel pretty confident that when we finish a batch of songs, or we finish a record that between the three of us, if we're happy with it, we're almost positive that our fans, definitely our loyal fans as well as maybe some fans that might not have heard of us before are gonna enjoy it as well. Young bands tend to use producers, and I think for a band like us, it's one of those things where we don't necessarily need one, but it's always nice to have an extra set of ears around regardless."

"I don't think we had any expectations in the beginning," Gontier told WRIF. "We were more excited than anything just to get this record out that we had made and get on stage and start touring. And we've done that. So that's been incredible. The most we could ask for was just to be able to get out and play the songs live in front of people.

"We all have the back story — me with THREE DAYS GRACE, Mike with STAIND and Corey with STUCK MOJO and DARK NEW DAY and EYE EMPIRE — but we definitely… we don't lean on our pasts to try to help us in the future," he continued ."It's more so a case of we're making another record and we just wanna keep evolving as musicians. I know working with Mike Mushok in the studio has been incredible for me. It's raised the bar tenfold from the band that I used to be in where it was a little bit different, where we'd all get in the studio and things would just be, for lack of a better word, things would be sort of mediocre. And this time around, we go into the studio trying really hard to be the best we can be, and Mike Mushok is legendary. He can write incredible guitar riffs and he can write incredible music, and the same goes with Corey. So the three of us together, we're in a place right now where we're really happy with the music that we're writing. We're taking a step forward."

He added: "I believe this record is a big evolution for us. I honestly believe the next record is going to be… For us, for SAINT ASONIA, I believe it's gonna be the record that will jumpstart — if we haven't already — catapult what we've been trying to do so far."