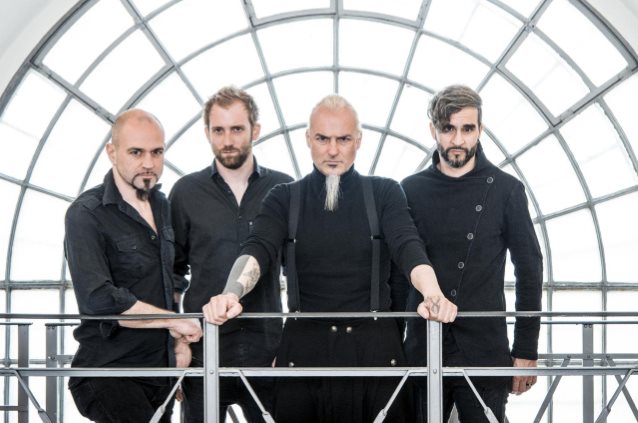 This past fall, Swiss industrial black metal pioneers SAMAEL played a couple of select shows around the release of their new album, "Hegemony", one of them in the picturesque town of Lausanne in their home country, surrounded by die-hard-fans, family, and friends. They captured that very special night with a live performance video of one of their newest songs, "Rite Of Renewal".

SAMAEL states about the video: "This is the first song from 'Hegemony' that we presented live and it became an instant classic.

"The video was shot in Les Docks in Lausanne during the first show that followed the release of 'Hegemony'. It was later edited by Sergey Ulyanov, who previously worked on other visuals for us. The song itself is a mid/uptempo track that shows a more technical side of our music. The dynamic is kept by altering fast and dense parts with open and heavy ones until the grand final with super heavy riffs and apocalyptic keyboard parts.

"Hegemony" was released on October 13 via Napalm Records.

SAMAEL frontman Vorph (real name: Michel Locher) told Invicta Magazine about "Hegemony": "It is quintessential b>SAMAEL as it has all the elements that make our sound what it is. It was not something we planned; it came naturally. Our producer, Waldemar Sorychta, came back to Switzerland and coach me during the recording of the vocals. The last time he did that was for the recording of 'Passage' twenty years ago."

Regarding the overall musical direction of "Hegemony", Vorph said: "I think it's kind of wide [sounding]. There's faster songs… probably 'Angel Of Wrath' is one of the heaviest. We have more mid-tempo songs. We try to have variation. I hope it is a varied album."

Founded in 1987 as an old-school black metal act that was influenced by the likes of BATHORY, fellow countrymen CELTIC FROST and VENOM, the brothers Vorph and Xy later developed the band's style further towards a more industrial dark metal sound that found its previous high peak in those legendary albums such as "Passage" and "Eternal".