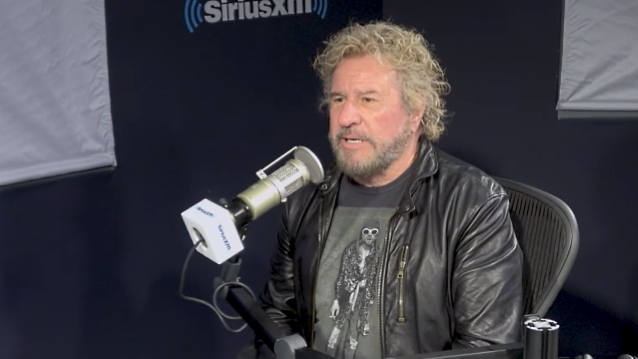 Sammy Hagar has admitted that he got "nervous" when the rise of grunge in the early 1990s forced most hard rock bands off the radio and MTV, with album and tour sales plummeting.

"I'm in a totally comfortable place now," Hagar said during an appearance earlier today (Tuesday, April 9) on SiriusXM's "The Jenny McCarthy Show" (see video below). "But when [I was in] VAN HALEN, in the '90s, when grunge came along, that was freaky. Because I'm looking at these guys… And we were sort of the glam rock — we were all dressed up and dressing like girls and stuff. Like MÖTLEY CRÜE and POISON and these guys. It was more fun dressing like that than the way I dress now, I'll tell you that. But then, when grunge came, they were down and dirty and funky. And they made me nervous. I thought, 'These guys are gonna disrespect us. You know they're gonna look at us and say, 'Yeah, your shit's done, buddy.'' But it didn't happen. I was so insecure about it that I invited ALICE IN CHAINS, with their first album and their first single — when they had 'Man In The Box' — to open for VAN HALEN. They came out on the whole tour with us. And I've been dear friends with Jerry Cantrell since then. But that's how insecure I was. I said, 'Let's get 'em on the damn show. That way their fans will know that we're cool.'… I came out of fear — not bad fear, but nervousness. And they did really good, and business was good. And I made a friend out of it."

Hagar, who plays with former VAN HALEN bassist Michael Anthony in both THE CIRCLE and CHICKENFOOT, hasn't made music with Eddie or Alex Van Halen since his final tour with VAN HALEN back in 2004.

In 2007, the Van Halen brothers, Wolfgang Van Halen and singer David Lee Roth announced they would be hitting the road for a reunion tour.

SAMMY HAGAR & THE CIRCLE's debut album of original material, "Space Between", will be released on May 10 through BMG.