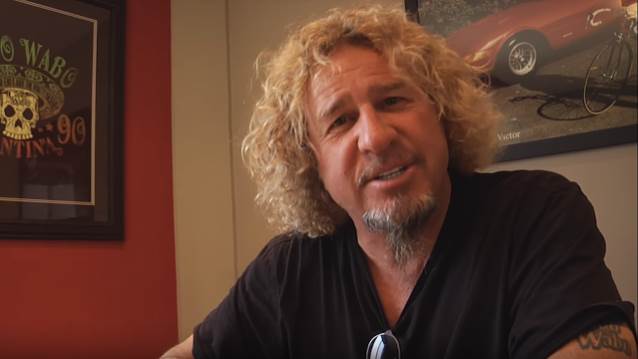 SAMMY HAGAR: I Reached Out To ALEX VAN HALEN On His Birthday

Sammy Hagar says that he recently attempted to reconnect with his former bandmate in VAN HALEN, drummer Alex Van Halen. "I reached out to Al on his [65th] birthday [on May 8]," Sammy told SiriusXM radio host Eddie Trunk. "I sent him a nice text and an e-mail and a phone message, saying, 'Hey, Sammy here. Missed you, buddy. Hope you're doing good. Happy birthday. And if you ever wanna get together and talk, be buddies, be friends, here's my e-mail, here's my text, and here's my house phone number…' Nothing. Oh, and I said, 'How's Ed doing? I hope he's healthy. And give him my love.' Nothing. Nothing! Ooooh! I mean, that's, like, wow! I guess no waters went under that bridge. And when I looked at the bridge, it was dry. There's not a drop that comes down underneath that bridge."

Hagar also revealed that he asked original VAN HALEN singer David Lee Roth to join him at his inaugural "High Tide Beach Party & Car Show", set to take place on Saturday, October 6 in Huntington Beach, California. "We invited Roth, offered to hire Roth to come and jam with my band at the festival," Sammy said. "And you know what his guy said? 'Oh, sounds interesting. We'll run it past Dave.' Then radio silence. [Laughs]"

Last November, Sammy said that he had lost hope there will ever be another VAN HALEN reunion, explaining that Eddie and Alex Van Halen do not want to reconnect with him as friends.

During an appearance on SiriusXM's "Trunk Nation", Hagar revealed that he didn't hear from the Van Halen brothers on his birthday, which he interpreted as them having no interest in rekindling their friendship.

Hagar and Roth actually toured together in 2002, when neither one of them was in VAN HALEN, although Hagar told The Pulse Of Radio at the time that they weren't exactly pals.

Hagar, who exchanged tweets with Eddie Van Halen in January 2016, hasn't made music with Eddie or Alex since his final tour with VAN HALEN back in 2004.

In 2007, the Van Halen brothers, Wolfgang Van Halen and Roth announced they would be hitting the road for a reunion tour. Bassist Michael Anthony later told Music Radar that he "found out about that tour like everybody else did — in the press."

Anthony has played primarily with Hagar in the thirteen years since he last performed with VAN HALEN, in groups like CHICKENFOOT and THE CIRCLE.