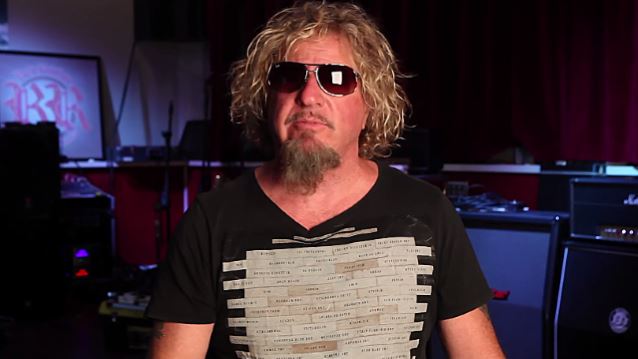 SAMMY HAGAR Looks Back On His Original Exit From VAN HALEN: 'Grunge Was Kicking Everyone's Ass But Ours'

In a brand new interview with RollingStone.com about the 30th anniversary of VAN HALEN's "5150" album, Sammy Hagar spoke about his original split with the band in 1996 amid a flurry of ill will and accusations from both sides, with Hagar eventually reviving his solo career.

"Breaking up then was the worst timing they could have possibly done," Sammy said. "Grunge was kicking everyone's ass but ours. All the hair bands were taking a dump, but not VAN HALEN. 'Balance' was No. 1 and the tour was sold out. We were the only ones holding our own against all the grunge bands. To make a change then was a big mistake. I think it still is for VAN HALEN. I think if we had stuck all that out and kept making good records, we could probably still be a real thing, probably what LED ZEPPELIN would be if they were still around. There are certain bands that had that thing, and VAN HALEN was certainly one of them. I would like to have seen what Ed [Van Halen] and I could have done as songwriters. I'm not saying I want to do it again because I think we lost that opportunity, but one of the biggest mistakes that VAN HALEN made was trying to break up when the world of music was changing."

Asked if he looks back at the first year together as his best times with VAN HALEN, Hagar said: "No. We continued to have good times. I got to tell you, they were all good times until the 'Balance' record. That was the end of the good times. 'For Unlawful Carnal Knowledge' was a good time. I was going through a divorce and it was a hard time personally, but on tour I might have had a better time than I've ever had in my life. I was becoming a free man, being the lead singer in one of the biggest bands in the world. There was nothing wrong with those times either."

Rumors that VAN HALEN's original singer David Lee Roth could possibly once again be succeeded by Hagar have become more persistent during the band's current hiatus.

Hagar sent a tweet to Eddie Van Halen in January wishing him a happy birthday — and got a cordial response — despite the bad blood that has existed between the two of them since 2004. Hagar later said that part of the reason he did it was because of the recent deaths of rock legends Glenn Frey and David Bowie.

VAN HALEN has been quiet since completing a North American tour last fall and putting out a concert set called "Tokyo Dome: Live In Concert".