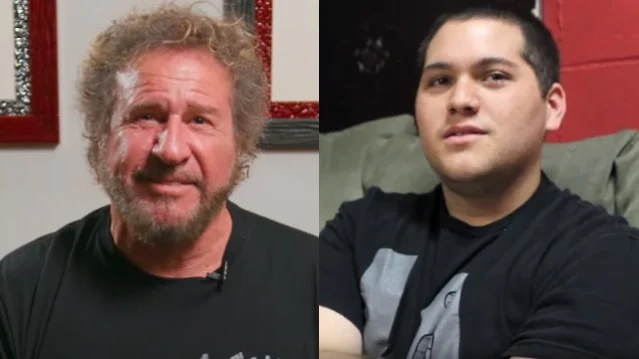 The 29-year-old VAN HALEN bassist has spent the last few years working on his debut solo LP, which he has said will not sound like VAN HALEN or feature guest appearances by any of the other VAN HALEN members. He also told a fan on Instagram that he sees his father's reputation as both a blessing and a curse when it comes to his own solo career. "I'm not trying to be my father, I'm trying to be me," he wrote.

According to Van Halen News Desk, Sammy saw Wolfgang's post and left the following comment. "Wolfie, that's a great answer. And the only way you will ever be happy and satisfied is doing your own thing the way you hear it in your head and feel it in your heart! You inherited genetically enough talent for 10 lifetimes. Use it the way you want. P.S. I've heard a couple snippets and they are bad fucking ass!!! Hope I run into you someplace once we all get out of prison ha ha. Stay safe. Love to your mom & dad."

Wolfgang responded: "Thanks so much for the kind words, Sam! Can't wait for you to hear it. Much love to you and yours."

This past May, Sammy told Rolling Stone that he is very optimistic about the possibility of a reunion with his VAN HALEN bandmates. "I foresee it happening," he said. "I'm not trying to plant a seed like I know something is happening. I know nothing. I just know what I know in my heart and my head, which is that it has to happen. Whether it's Sam and Dave or not, I don't know that either," referring to the prospect of both him and original VAN HALEN frontman David Lee Roth the stage with Eddie, Alex and Wolfgang Van Halen. "But I know that Eddie and I are not done. If enough water goes under the bridge before we die, it'll happen. It has to. God is going to slap us both around if he has to."

Although he hasn't spoken to Eddie since since the conclusion of VAN HALEN's 2004 reunion tour, Sammy says that he doesn't agree with Roth's recent assessment that the band is "finished."

"Until Ed or Alex Van Halen die, they're not finished," the 72-year-old rocker told Rolling Stone. "Those are two great musicians that can friggin' do as good as most people at half-mast. As a drummer and as a guitarist and creative person, Eddie, I can't see them ever being finished. I wish they were more active, but I think VAN HALEN will never be finished.

"If they want to get it together, they just have to call Dave or have to call Sammy," he added. "They can go out with [Eddie's son] Wolfie as a trio, but that's not the legacy of VAN HALEN. I think they know that. I'm not predicting what's going to happen, but I would tell you if there's concerts next year, VAN HALEN will probably be on tour next year." 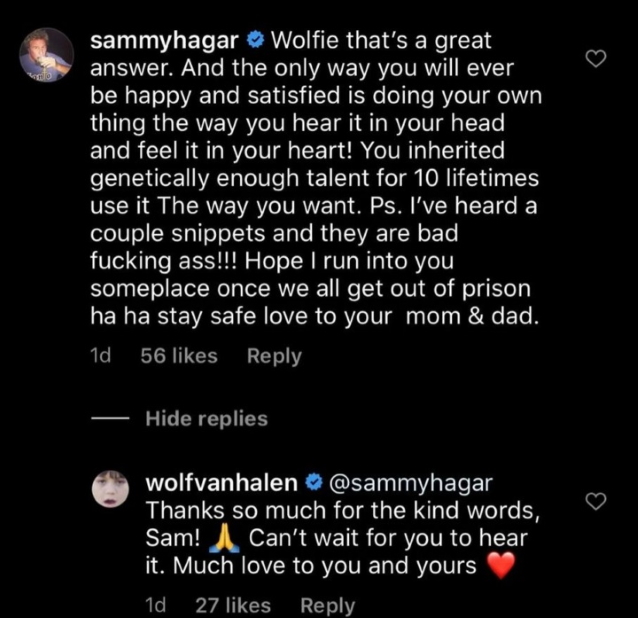