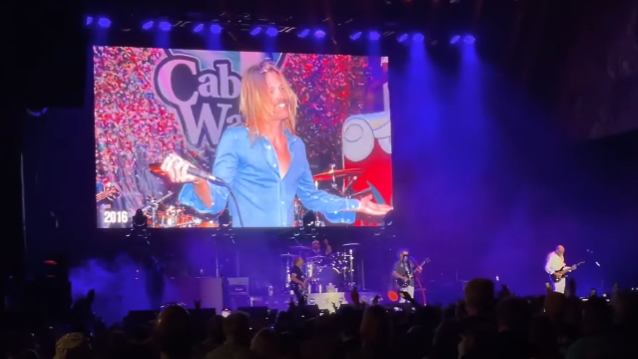 SAMMY HAGAR & THE CIRCLE paid tribute to FOO FIGHTERS drummer Taylor Hawkins during their April 29 concert at the Beale Street Music Festival in Memphis, Tennessee. Hagar and his CIRCLE bandmates Michael Anthony, Jason Bonham and Vic Johnson performed a cover of FOO FIGHTERS' "My Hero" as a way of honoring Hawkins, who died in late March while on tour with the FOO FIGHTERS.

FOO FIGHTERS had been scheduled to play the festival on April 29, but the Dave Grohl-fronted outfit canceled all planned concert dates following Hawkins' passing.

Regarding THE CIRCLE's decision to cover "My Hero", Hagar wrote: "When we were asked by the promoter to fill in for the FOO FIGHTERS at the Beale Street Music Festival, my first reaction was 'No fucking way!' We discussed it as a band, and we came up with 'Why not! Let's just go play music and you're at a big ass CIRCLE party for those people, just do what we do!' Then with Dave Grohl's blessings we decided to do a broken down version of one of my favorite songs from one of my favorite bands. It felt appropriate. No rehearsal, After all this is rock 'n' roll and thats what it's all about. Enjoy."

Last month, Bonham, whose father is drummer John Bonham, one of the original members of the legendary rock band LED ZEPPELIN, spoke to Joe Rock of Long Island, New York's 102.3 WBAB radio station about Hawkins's death. He said (as transcribed by BLABBERMOUTH.NET): "When we lost Taylor, it open[ed] a floodgate of memory for the day that I found out my father passed. And to [Taylor's] family and to his friends and his children, my love and best wishes go to them with every ounce of me. He was a wonderful person. I got to hang with him on several occasions and Dave [Grohl, FOO FIGHTERS frontman], and the whole band are just amazing guys."

Referencing his March 25 performance with SAMMY HAGAR & THE CIRCLE at The STRAT Hotel, Casino & SkyPod in Las Vegas, Jason continued: "For me, that was one of the hardest shows I've ever had to play, was 10 minutes after finding that out [that Taylor died]. As I said, it's not just because of him. At that time, for me, and I think for a lot of us, when somebody like that passes, if we've lost somebody close to us, it brings back all of that. But we have to remember it brings back also the joy, the smile, the laughter. I'm fortunate — my dad, there's enough clips on YouTube and the Internet that you can go to, and I can say to my children who never met him, 'This is your grandpa...' So for us, we're blessed — there is footage always there to show them what he was like. And some people don't have that. So I feel very fortunate."

John Bonham died suddenly in 1980 at the age of 32 after choking on his own vomit, following a night of heavy drinking. Within the previous 24 hours he had consumed around 40 shots of 40 percent ABV vodka.

An official cause of death for Hawkins hasn't yet been released, but on March 26, Colombia's attorney general's office issued a preliminary toxicology report, saying that medical examiners found evidence of 10 types of substances in Hawkins's body, including opioids, benzodiazepines, marijuana and antidepressants.