Presented by Fathom Events and AXS, "Red Til I'm Dead: Sammy Hagar's Rock-N-Roll Birthday Party" will feature the best of the performances and party action from the four-day rock spectacular when it hits cinemas nationwide for one night on Tuesday, December 5 at 7:30 p.m. local time. Moviegoers will also enjoy a behind-the-scenes look at the music that spans the career of the one and only Red Rocker, plus birthday wishes from famous friends.

"I've been celebrating my birthday in Cabo for almost 30 years and I couldn't begin to pick a favorite year," said Sammy Hagar. "I've had hundreds of friends who've come down to perform and party. Each year is packed with so many insane collaborations and moments that I'm just happy that the rest of the world can finally get in — and celebrate alongside us as it unfolds on the big screen."

Tickets for "Red Til I'm Dead: Sammy Hagar's Rock-N-Roll Birthday Party" can be purchased online beginning Friday, October 27 by visiting FathomEvents.com or at participating theater box offices. Fans throughout the U.S. will be able to enjoy the event in select movie theaters through Fathom's Digital Broadcast Network (DBN). A complete list of theater locations is available on the Fathom Events web site (theaters and participants are subject to change).

Sammy Hagar is a Grammy-winning singer and songwriter who has sold more than 80 million albums during his four decades as a solo artist and frontman for bands including MONTROSE, VAN HALEN, CHICKENFOOT and THE CIRCLE. He was inducted into the Rock And Roll Hall Of Fame with VAN HALEN in 2007, is also a #1 New York Times bestselling author, host of the TV series "Rock & Roll Road Trip With Sammy Hagar", restaurateur and spirits entrepreneur. He turned his love for Cabo San Lucas, Mexico and hand-crafted tequila into an empire with the Cabo Wabo Cantinas and Tequila and has since added nine restaurants throughout the United States, the award-winning Sammy's Beach Bar Rum, and in 2017 launched a new Santo Mezquila with Adam Levine.

"Sammy's parties in Cabo have become legendary, with a lottery system determining which fans receive the incredibly-limited tickets," said Fathom events VP of programming Kymberli Frueh. "We are pleased to partner with AXS to give 'Redheads' nationwide the opportunity to join the party from their local movie theater." 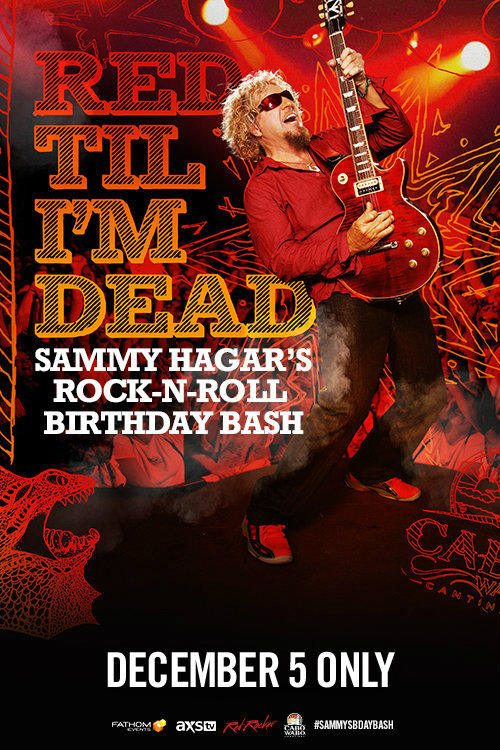