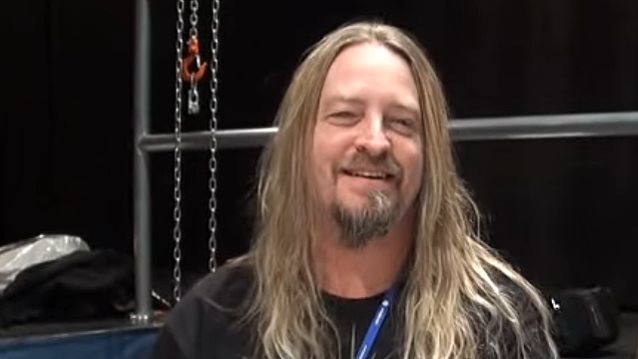 On what prompted Rutledge to unearth the old demos that now comprise of SANCTUARY's forthcoming "Inception" release:

Lenny: "I don't know if I was necessarily searching for those, but the truth is, my plan was to tear the barn down [where the tapes were housed]. The bottom floor of the barn is pretty decent; it's our studio and everything, so that's where we did a lot of recordings, that's where we do pre-production for tours. It's pretty decent. The top floor, it was like a hayloft for animals that was opened up to the elements and the roof was pretty bad. I was planning on rebuilding or re-modeling it. I was up there doing stuff, and that's when I started to figure out, 'Oh no. We made an error and stored this box up here that wasn't supposed to be up there.' I wasn't aware of it. I knew I had them somewhere, but it was like an out-of-sight/out-of-mind type of thing. Finally, when I found them, it was shock and horror they were in that bad of shape. I wasn't sure if we could do anything with them. They were in pretty bad shape. The good thing was that I found a place that actually restores those type of tapes. They take those two-inch reels. They put them in a giant dehydrator. It looks like something you would cook beef jerky [in]. It somehow pulls all of the water out of it and restores the magnetic property to the tape. It turned out pretty well. I was shocked and amazed. I guess they're pretty robust, those tapes."

On whether he remembers recording SANCTUARY's pre-"Refuge Denied" demos:

Lenny: "I do. We did a couple of the songs at a really nice studio in Bellevue [Washington State]. It was the same studio where QUEENSRŸCHE recorded. We didn't have very much money, so we could only do two songs, we did 'Battle Angels' and 'Soldiers Of Steel' there. Those recordings were done pretty well; it was a 24-track [studio]. We didn't take our time, but we took a little more time on those two songs. Then we decided 'Well, we're out of money. We need to go somewhere where it's going to be a lot less expensive.' We went to a place called Studio One. It was in a really bad part of town. The studio wasn't that great. It was only a 16-track studio. It seemed like the gear was always malfunctioning. We didn't have enough mics to put on the cymbals, all kinds of things. Considering all of those factors, I'm really surprised that a lot of these songs sounded as good as they did. We used at least three or four mics on the entire drum kit. [Producer] Zeuss [Chris Harris] had to do some really creative things when he mixed it. I can't even explain it. He tried to explain it a little to me. There were times he used a mic that was for a tom, he'd EQ it to pull in cymbal sounds. He would double that tom somehow on another track, then he'd EQ a tom separately to pull in the frequencies of the cymbals and the high-hat because there were no mics on them. It was very weird the way he did it. He spent a lot of time on it. There was some magic involved as far as that's concerned. He took a lot of tones that were pretty mediocre and he just knows how to engineer and mix very well. He made something very great out of it. We were all surprised."

On putting together the liner notes and vintage photos for "Inception":

Lenny: "It's weird. We didn't record it. This record was recorded 30 years ago, but I still put so much time into this record, making it a collector's 'one of a kind' type of thing. With all the photos and the stories… believe me, we dug up photos from places I didn't even realize we had. We talked to different people and friends, crew, and stuff like that. It's something people will really enjoy. There are a lot of things you never heard us talk about, or photos you've never seen. In a way, it's almost emotional, when you open up photos of your old family from years ago, that whole thing, it brings back memories and emotions and all of that stuff. It was a very cool thing for me. Surprisingly enough, a lot of work. As much work as putting together a brand new record, minus the recording."

On the status of the next SANCTUARY studio album:

Lenny: "It's not done. We're still a little ways away. Warrel [Dane, vocals] has been working on some solo stuff. He was up here last weekend and we were working on some of the new songs, so we have quite a bit of the music rolling for it. The music comes first, usually, then he takes it and goes with it from there, writes the lyrics and everything. We're making good progress, but right now, he's scheduled to record his solo record. That will be first, then after he's done with that, then we'll start the recording of the follow-up to [2014's] 'The Year The Sun Died'. I think that will be late 2017, or early 2018."