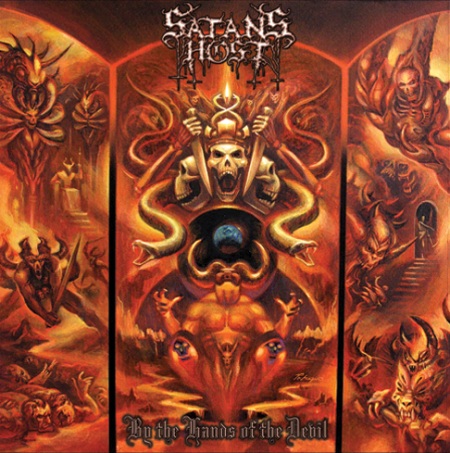 Satanic metal warlords SATAN'S HOST will release their ninth studio album, entitled "By The Hands Of The Devil", on May 3 via Moribund Cult Records. The CD was recorded at Flatline Audio with producer Dave Otero (CEPHALIC CARNAGE, DEMONICA, CATHETER, COBALT, MARTRIDEN) and features cover artwork (see below) by Joe Petagno (MOTÖRHEAD, MARDUK).

"By The Hands Of The Devil" track listing:

Following the departure of vocalist Eli Elixir and the return of Leviathan Thisiren (a.k.a. Harry Conklin of JAG PANZER and TITAN FORCE) into the SATAN'S HOST grotto on vocals, the band performed in Germany at the Keep It True festival in April and has done some local Colorado shows to prepare for the new album.

According to a press release, "founding six-string sorcerer Patrick Evil, with his cornucopia of über-evil riffs, has been at the top of his game with all-new tracks that will devour the weak at heart and those who try to dismiss this true metal virtuoso. Anthony 'Evil Hobbit' Lopez, making his second appearance on the drums of doom, has taken the groove to a new hellish high, and with the addition of Margar on bass, SATAN'S HOST have taken their musical journey to new, darker realms with deeper and broader themes and lyrical content."

Commented Patrick Evil, "I think this [is] our greatest album to date. Our ninth release for our 25th aniversary — how much better can it get than that?"