The Norwegian black metal band was originally going to release the covers disc prior to the arrival of its latest collection of all-new material, "Deep Calleth Upon Deep", but unforeseen events, including Satyr's brain-tumor diagnosis in 2015, resulted in a change of plans.

"That is something that we did do quite a lot of work with, but we had to shelve it because 'Deep Calleth Upon Deep' took all of our attention," Satyr told Israel's "Met Al Metal" radio show (hear audio below). "In general, we would like to pick up on that again. I don't know when that will happen, because we have to really want to do it — we can't just do it because it's something that we didn't finish; we have to finish it because we want to finish it. When we left it on the shelf, it was because, even though we were enjoying it, it took a lot of time and it took time away from the ['Deep Calleth Upon Deep'] album, which we thought was a more important project. So when you do a project like a covers album, it has to be because there is space for it in your life right now. But once we get there, yeah, it's possible."

Asked which tracks SATYRICON was planning to rework for the covers project, Satyr said: "We've been doing songs from musical genres that have been important to us that do not necessarily relate to black metal only. So we've been jamming covers from New Wave Of British Heavy Metal genre, we've been jamming folk music, we've done punk rock, '70s hard rock… That was the idea — that we were gonna work on things that have been influential to our careers, but not black metal."

Satyr also talked about his 2015 brain-tumor diagnosis and how his health is doing more than two years later. "Today things are going well," he said. "Back then, like any other person, that wasn't a good situation for me to be in, of course, but things are better now. I never had cancer or anything like that — I had a big cyst in my brain, which has caused a lot of health problems for me. You have to figure these things out and deal with them, but, in general, as adults, we will all find that there's gonna be some rocks in our paths and there's gonna be trouble, some stuff that we have to deal with — be it our own health, mental or physical, or it could be the health of people in our families or things like that. Unfortunately, that's just a part of life and something that we all have to deal with at some point sooner or later, and I have dealt with this to the best of my ability, and now I have reached a point where I feel that I can handle this condition very well. And I also am really appreciative of the concern and the thoughts of support that I've been receiving from SATYRICON fans all across the world — that's something that has definitely inspired me a lot."

"Deep Calleth Upon Deep" was released on September 22, 2017 via Napalm Records. The disc was recorded in Oslo, Norway and Vancouver, Canada, during early 2017 and mixed together with revered studio guru Mike Fraser (who previously worked on SATYRICON's 2006 album, "Now, Diabolical").

The "Deep Calleth Upon Deep" front cover is an obscure drawing from 1898 by perhaps the greatest Norwegian artist of all time, Edvard Munch. 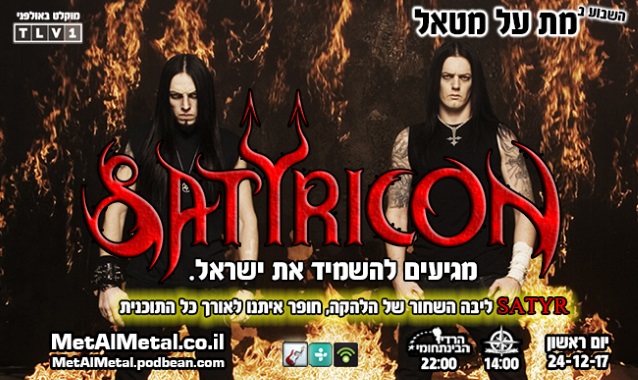