Norwegian black metallers SATYRICON are gracing the cover of this week's Kerrang! magazine. The issue is on shelves now, dated November 1.

The UK branch of Roadrunner Records has uploaded video footage footage of the photo shoot which took place in London recently.

If you are a UK resident, you can now stream the first four songs off the new SATYRICON album, "The Age Of Nero", at this location (courtesy of the UK branch of Roadrunner Records).

SATYRICON recently completed the video shoot for its new single, "Black Crow On A Tombstone". The song, which was released digitally on October 20, is available for streaming at this location. The single is the first track to be released from "The Age Of Nero", which hits stores in Europe on November 3 via Roadrunner Records.

Largely written in a remote cabin deep in the Norwegian woods by frontman Satyr in collaboration with his old friend Snorre Ruch (of THORNS; himself a legendary figure in the history of Norwegian extreme metal), "The Age Of Nero" features eight of the heaviest songs in SATYRICON's history.

The album will be available as a digital download, standard CD and as a special-edition two-CD set. Track listing will be as follows:

Plus this disc is also digitally enhanced with the videos for: 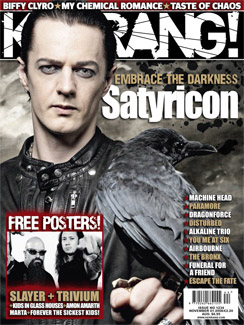