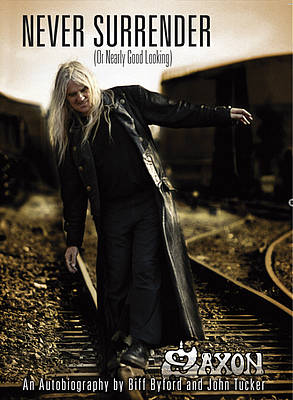 SAXON: 'The Inner Sanctum' Enters Swedish Chart At No. 39

SAXON's latest album, "The Inner Sanctum", has entered the Swedish album chart at position No. 39.

In other news, SAXON frontman Biff Byford has opened an online scrapbook featuring documents found in a box after his house burned down in March 2005. The first of the documents can be found at this location, with more to follow every few days.

SAXON has launched a podcast and tourblog via its official web site. Both will be updated regularly throughout the course of the band's European tour.

As previously reported, SAXON's official web site has been updated with the first excerpt from the soon-to-be-released autobiography by the band's singer, Biff Byford. Acccording to a posting on the site, the book, entitled "Never Surrender (Or Nearly Good Looking)" (cover),will be released in April via I.P. Publishing and will be on sale at your local bookstore and via various online retailers, including www.metaltix.com. Distribution in the U.K. will be handled by Gazelle Book Services Limited.

Download the first excerpt from the book — which was written by Byford and John Tucker — at this location (PDF file, 150 KB).