SAXON traditionally performs each year a show on St. George's Day. Honoring a fine tradition, the band is paying homage to England's patron, Saint George, whose traditionally accepted day of his death is April 23.

This 2CD set finds a blistering performance covering a collection of SAXON's finest work from 1979 up to 2013. A very special rendition of "Broken Heroes" goes straight to the heart and is dedicated to the British Armed Forces.

The release is not only available as a 2CD set, it will be sold digitally as well.

"St. George's Day Sacrifice - Live In Manchester" was mixed and mastered by Andy Sneap, and it was produced by SAXON singer Biff Byford.

SAXON's new album, "Unplugged And Strung Up", sold around 500 copies in the United States in its first week of release.

Issued on on November 18, 2013, "Unplugged And Strung Up" reveals layers and pieces previously dormant in many of the 14 classic SAXON songs chosen for this makeover, thanks to some ear-catching new arrangements and mixes. Recorded, mixed and mastered with Andy Sneap in Derbyshire, U.K. last year, "Unplugged And Strung Up" contains re-evaluated, re-worked and re-energized versions of "The Eagle Has Landed" and "Crusader" by introducing orchestral dynamics to offer added dimension. "Frozen Rainbow", from the band's 1979 debut, gets a stunning acoustic reprisal which transports it into a power ballad to be proud of, while "Red Star Falling" soars and sweeps the emotions with its orchestrally arranged dovetail. 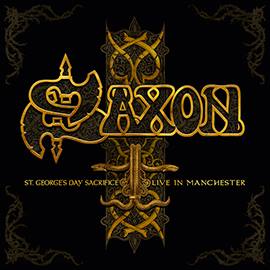