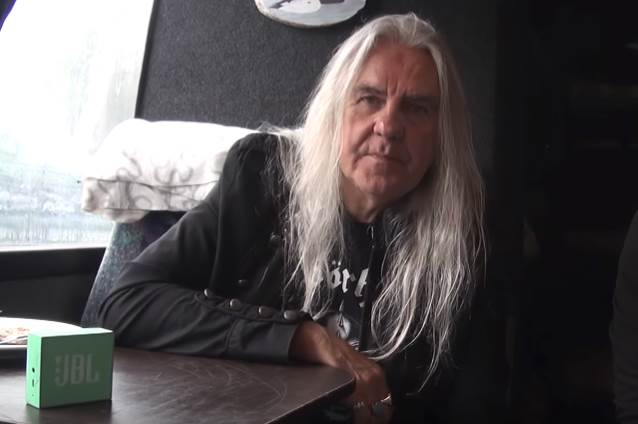 SAXON vocalist Biff Byford spoke to Finland's Kaaos TV about the progress of the songwriting sessions for his upcoming solo album. He said (see video below): "I'm writing with a few friends… We're just writing songs at the moment. I'm writing a song with Fredrik [Åkesson] from OPETH, the guitarist, and a few other people. We've just got ideas going backwards and forwards."

Asked which musicians he would like to work with, if he could, on the upcoming record, Biff said: "It'd have to be someone like Tony Iommi [BLACK SABBATH] or Eddie Van Halen [VAN HALEN] or something. I'm a bit of a guitar buff, so I like guitarists."

Regarding whether his solo effort will be a musical departure from SAXON, Biff said, "It'll sound like SAXON, 'cause I'm singing — you know, it'll be my voice. But it'll be a more diverse album — not quite so focused on heavy metal, but more diverse."

Byford told "Rock Talk With Mitch Lafon" in April that he had seven songs written for his solo disc, adding that the record will probably feature a number of guest musicians. "I'm gonna ask various people [to appear on the record]," he said. "It's not easy for guitarists to work with you, because they just smack down their signature solo and off you go. Singers, I might do some duets and things. We'll see. I wanna get the songs written first, and then see who wants to work on them. I'll probably have a nucleus of a drummer and a bass player, although I might play bass myself. I've still got my Rickenbacker."

Asked why he just doesn't use the extra material for a future SAXON album instead of setting it aside for his solo disc, Biff tod "Rock Talk With Mitch Lafon": "Well, I did. Actually, 'Roadie's Song' [off SAXON's 2018 album 'Thunderbolt'] was a solo album project. And I do move them across all the time. And actually, originally, 'They Played Rock And Roll' was a solo-album idea [that also ended up on 'Thunderbolt']. So I do that all the time. And I do have songs that me and Nibbs have written for SAXON that I didn't think were right for SAXON that might end up on my solo album."