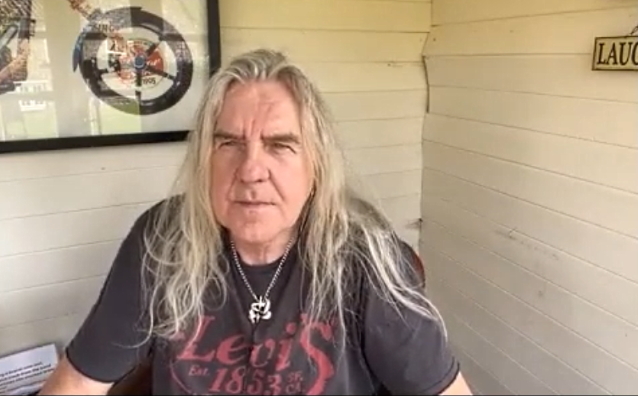 Biff Byford has told Germany's Rock Antenne that SAXON has always written music that was intended to be performed in concert. "We're a big live band," he said (as transcribed by BLABBERMOUTH.NET). "I think all the bands are from that era that are still around — [JUDAS] PRIEST and [IRON] MAIDEN, SAXON, WHITESNAKE. They still do a lot of touring, because our music is written for live — we write music to play live, and we always have done. I think maybe in the late '80s, we sort of made more records for the studio, but I soon changed that around again and went back to writing songs that we wanted to play live. And I think that's one of the big keys. Then you don't get too carried away with all the arrangements and all the production. We use a lot of keyboards and effects and things to make things interesting, but we're not trying to write for anybody in particular — we're not trying to have a radio hit or a hit video on YouTube. We're just trying to write great songs that we can play live."

Two months ago, Biff revealed to TotalRock's DJ Force X that SAXON's new album is tentatively scheduled to be released in February 2022. The disc's first single will likely arrive at the end of this year.

Last June, Biff told Metal Rules that the recording sessions for SAXON's follow-up to 2018's "Thunderbolt" were "coming along nicely. There is no pressure at the moment, to be honest, as I work better under pressure," he said. "We are recording our bits and pieces and have 11 songs that are done and ready to go. I did most of the writing, and I'm just waiting for the lockdown to be over so we can go to the studio and finish it off."

In March 2020, Biff told The Metal Voice about the musical direction of the new SAXON material: "It's heavy. I would say the direction is the same as 'Thunderbolt' and 'Battering Ram' [2015] [and] 'Sacrifice' [2013]. It's heavy and it's quite British[-sounding]; we like to retain that. Me and [bassist] Nibbs [Carter] wrote most of the songs again."

He continued: "What I do, I have a start time when I want the boys to start writing, and that's how we do albums. And Nibbs is just a fiend with it — he just writes so many ideas down; it's crazy. I'm getting ideas from all the boys, but predominantly most of them are from Nibbs.

"So, yeah, it's heavy," he added. "There's some great guitar playing on it from the boys. And Nigel's [Glockler] drumming is up there with much younger drummers, if you know what I mean — he's pushing himself very hard with it… Andy Sneap is producing it. So we'll see how it goes."

SAXON released a covers album, "Inspirations", on March 19 via Silver Lining Music. The 11-track effort contains some of the classic rock songs that influenced Byford and the rest of the band.