Shredguy Records will be release "Shredding Across The World... Volume Two" on February 10. After the success of "Volume One" (which featured Tore Moren of JORN, among others), "Volume Two" promises to be bigger and better!! This time 17 guitar players will be featured on 15 tracks. Guitarists include:

President of Shredguy Records, Michael McDowell, says "This is by far our best release. We have guitar players of various styles and in different contexts, from the all-out shredding of Adrian English and Pete Pachio, to the heavy playing from Tracy G, melodic hard rock on the Neal Grusky track, to the bluesy offering from Stephen Ross and Ron Cannella. This time we even included three vocal tracks, so listeners get to hear the vocal talents of Dale Toth (of ROGOSONIC), Gus Monsanto (of TAKARA and REVOLUTION RENAISSANCE), and Dean Sternberg (currently recording with LIVESAY)!! Top that off with appearances by Ray Luzier (drummer for KORN), Conny Payne (former bassist of MADISON), Andy Hall (drummer for LEGACY and HUMAN PARADOX), Op Sakiya (ex-keyboard player for HEIR APPARENT), plus our cover model Calvina Sparkes and we have a star-studded release!!"

Pre-orders are being taken at www.cdinzane.com. 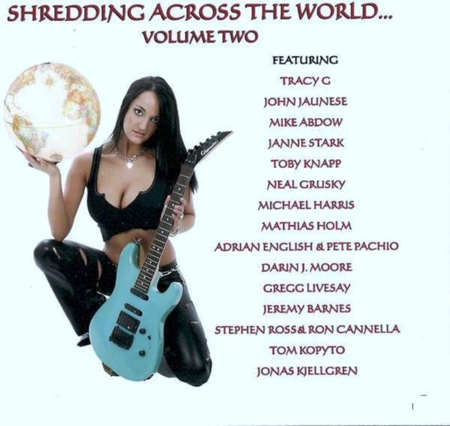