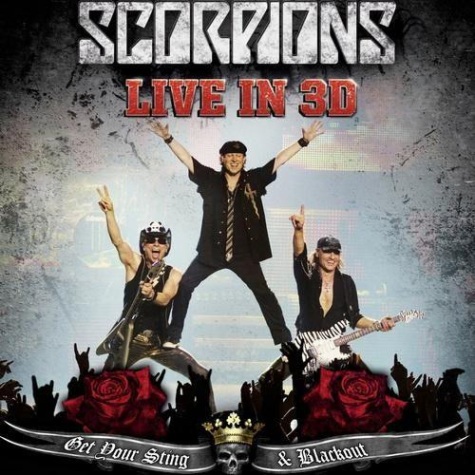 SCORPIONS: 'Get Your Sting And Blackout - Live In 3D', 'Comeblack' To Receive U.S. Release

Legacy Recordings has set January 24 as the domestic release date of two essential new titles from the seminal metal band SCORPIONS: "Comeblack", a new album of classic rock covers and fresh performances of signature repertoire recorded earlier this year, and "Get Your Sting And Blackout - Live in 3D", available on Blu-ray disc, an 11-camera 3-D concert film recorded in Saarbrücken, Germany on April 15, 2011 during SCORPIONS' current farewell tour.

Launched by guitarist Rudolf Schenker in 1965, SCORPIONS forged metal, rock and pop into a sound that's come to signify an entire genre through hard rock anthems like "Rock You Like A Hurricane" and hits like "Send Me An Angel", "Wind of Change" and "Still Loving You", selling more than 100 million records in the process.

Last year, SCORPIONS announced that the group's "Get Your Sting And Blackout" tour, an epic ongoing worldwide rock 'n' roll odyssey in support of 2010's "Sting In The Tail", would be the group's last before retirement. The tour is slated to run through 2012 with a string of historic farewell blowouts and festival performances scheduled Europe culminating with shows at the Wacken Open Air festival (August 4, 2012) and Munich's Olympiahalle (October 13, 2012).

Wanting to create a truly memorable concert film to do justice to power of the live show and the high energy emotional impact of the final tour, SCORPIONS chronicled the sold-out concert on April 15, 2011 in Saarbrücken, Germany with a state-of-the-art 3D production. Helmed by director Gerd F. Schultze (who's worked on 3D films with Michael Jackson, Bryan Adams, Joe Cocker, Carlos Santana and German superstar Peter Maffay),"Get Your Sting and Blackout - Live in 3D" puts the viewer into the VIP box at the ultimate SCORPIONS concert. In addition to 100 minutes of pure SCORPIONS music, "Get Your Sting And Blackout - Live In 3D" includes more than half-an-hour of behind-the-scenes bonus material.

"The preview audience was absolutely euphoric and stunned by the intensity and the never-before-witnessed power and intimacy in which they were able to experience the SCORPIONS' fantastic concert," said Gerd Schultze following a theatrical screening of the film. "The people left the screening with a completely new and never-before-seen concert experience and wanted to watch it all over straight away. Part of the reason is that we have managed to create an unbelievable 3D depth with a specially developed method, which is very pleasant to watch. Using the new camera technology, we managed to translate 3D in the cut and montage technique in a style that will meet the expectations of a first class product even in ten years time. It makes you feel like you're sitting in the VIP lounge amidst the audience through this 11 camera 3D concert staging and its monstrous 5.1 surround and stereo sound. At the same time, the SCORPIONS perform their unbelievably powerful and visually unique show with all their hits live in your living room. This is pure dynamite ... fasten seat belts and take off ... into the third dimension."

"Saarbrücken was a very good choice," wrote the band in a press statement, "our fans were simply sensational and gave us the chance to thank them for their many years of support."

At some point during the "Get Your Sting And Blackout" tour ("We can't remember the day, the month or the hour"),SCORPIONS, enjoying the success of "Sting In The Tail" and the emotional rejuvenation of the farewell tour ("Screaming fans everywhere we went!") decided to record one last classic album. "The idea to go back to the studio was born out of pure excitement," said the band who cut an album mixing covers of rock 'n' roll standards that informed and inspired the SCORPIONS alongside new productions and performances of the songs in the band's core catalog that have proved the most meaningful to the members.

The result, "Comeblack", is, according to the band, "an encore for our die-hard fans, to thank them for all the support for so many years. At the same time, this is a tribute to legendary bands from the sixties, like THE BEATLES and THE ROLLING STONES, who have inspired us to follow our dreams. We hope you like it as much as we do... Rock on and ... Comeblack."

"Get Your Sting And Blackout - Live In 3D" track listing: