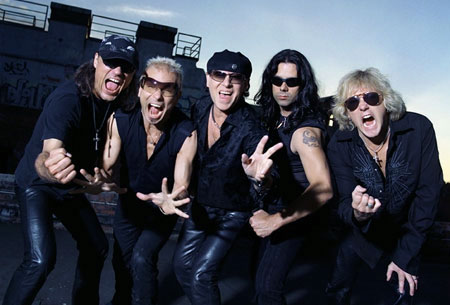 SCORPIONS Guitarist: 'Everything Is Possible And Can Happen If You Believe It'

Beyond The Dark Horizon recently conducted an interview with SCORPIONS guitarist Rudolf Schenker. A couple of excerpts from the chat follow below.

Beyond The Dark Horizon: Aside from "friendship," the entire success of the SCORPIONS has been based on the notion of pure positive thinking — a philosophical approach?

Rudolf Schenker: Of course! Everything is possible and can happen if you believe it. Most people don't believe in anything. They believe in doing as less as possible and getting as much money as possible. That's not the right way. It doesn't bring you happiness but only keeps you looking for the next money opportunity. There's always money; it's always going to be there. There's only one way and it's follow your own instinct. You will then become stronger and build your personality up.

Beyond The Dark Horizon: How would the band get through confrontations or bumps in the road?

Rudolf Schenker: There were bumps in the road throughout the '90s — when alternative and grunge music came into the picture. But we we're lucky enough that we did not follow the money line by only playing in the places where the money was — like Europe, the United States and London. No, we went early on in the '80s to Asia. We were building up the Asian market even when there was no market. In this case we played there and when the Asian market built record companies, we we're already big there. While grunge was taking up the scene in North America and Europe, we played in huge stadiums in Asia. This is where you follow your instinct and this is why we would not come across too many bumps.

Beyond The Dark Horizon: You live a very positive and spiritual life; did religion play a role in your childhood? How did this awakening for a positive way of thinking come about?

Rudolf Schenker: What inspired me the most was Eastern Philosophy — yoga, meditation, gurus, Buddha and all the people who have a right picture of the world. They help give you the right inspiration of what is very important in life. Ours has just been here in a messed up world, more and more go in the direction of please, they please everything outside themselves instead of inside themselves. What they feed themselves is the rubbish that they can get their hands on. They have to get the best computer in the world, iPods, iPhone and everything but go to the cheapest markets to get something to eat. They do this without realizing the conditions of chickens in farms — they can hardly move and pigs are getting injections like crazy to grow faster. Their whole world is upside down and that's the reason why nobody is ever satisfied. Then you switch on the TV and see a few films of people killing each other, commercials telling you to eat pizza and burgers when the ingredients contain chemicals. This is a world turned upside down and where the people who achieve the most money are living in a glamorous world and present themselves every day in new outfits. So this is a situation where the world is cliché and the real stuff, nobody goes for that because it's not interesting enough. This is the reason why I went very early on into yoga and meditation, to find out what the most important parts in life are and follow this line. But not going to India and sitting there, no, I'm living in the real world and trying to connect my knowledge to other people who have the same thoughts and also give people across the world great music to enjoy with their life.

Beyond The Dark Horizon: Where do you see the future of rock and roll? Do you think there are any bands today that can possibly hold up that torch that the SCORPIONS have held for four decades?

Rudolf Schenker: (A long pause) Believe in yourself. Follow your instincts and look for people that have the same vision and ones you can build a friendship with. That's the basic line and everything else will come by itself. It's a very important point and yet most people want success immediately. But you have to give space. Space is a very important part of living. If you want to have everything immediately, you will not have patience and you will get nothing. You will always change your direction and as soon as you find out that you're not getting what you want, you go this way and that way, and then you end up running your whole life away, away from what you really want.

Read the entire interview from Beyond The Dark Horizon.