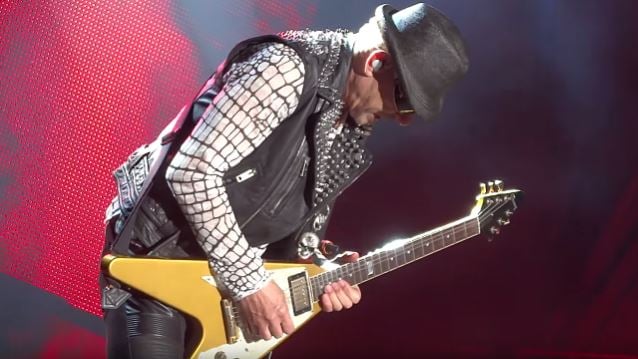 In a brand new interview with The Boston Globe, SCORPIONS guitarist Rudolf Schenker spoke about his plans for after the band completes its 50th-anniversary tour. He said: "My brother [guitar hero Michael Schenker] is already very angry at me, because I said to him when we were on the farewell tour, let's make a Schenker Brothers album. I haven't played with my brother for a long time — maybe here and there on a SCORPIONS stage, like in Wacken [at the Wacken Open Air festival], but not in the studio. I think it would be a great thing to do, and there's a lot of people waiting for it."

Asked by RockSverige.se earlier this year if he and Rudolf were in competition with each other when they were younger, Michael said: "Not me. Absolutely not. Maybe he did. I don't know. For me, music is just about expression. If you're focusing on a trend, then you're in a race, and that's different. I guess my brother was focusing more on trends and maybe he studied anything that would keep him within the trend, but I would do the exact opposite. I would do anything to stay away from that and just focus on self-expression. That's the only thing that makes sense to me, and that's the only place I wanted to be in, and it's the only place where I can enjoy myself. There's no pressure and complete freedom. That's the reward in itself right there."

He continued: "We had two completely different visions. My brother had the vision of being in a famous band and my vision was to become a great guitar player. I'm six and a half years younger than my brother, so maybe I was born to help him out. I jumpstarted the SCORPIONS with my songs, then I left for UFO and then I came back to jump start them for America. Then I went on my own and came back in '93 to do a tour with them in England and get the houses full. Whenever he needed me, I was available to help him, but it was not a necessity for me to have. I admire my brother's success and how he made it with so little. He's more like a magician than a musician."

SCORPIONS are celebrating 50 years of rock with the release of their 19th studio album, "Return To Forever" (Sony Music/Legacy Recordings),on September 11. Produced by their two favorite Swedes, Mikael Nord Andersson and Martin Hansen ("Sting In The Tail", "MTV Unplugged"),the 19-song collection will be available in various formats including digital, deluxe CD, and vinyl. The North American configuration boasts three exclusive tracks alongside four bonus tracks previously available only in specific territories. The first single, "We Built This House", was released digitally on July 3, and was made available to fans as an instant-grat for the album preorder, available at Amazon.