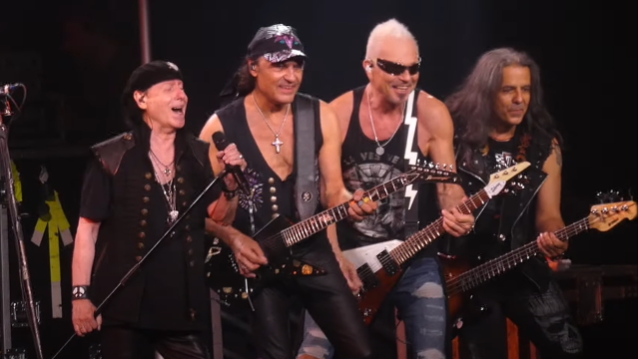 German hard rock legends SCORPIONS have been forced to postpone the first three concerts on the European leg of their 2022 world tour due to an unspecified injury suffered by guitarist Matthias Jabs.

The concert promoter will announce in the next few days when the shows in Lisbon, Portugal (originally scheduled for May 10),Toulouse, France (May 13) and Lille, France (May 15) will take place.

The SCORPIONS tour will resume on May 17 at the Accor Arena in Paris, France.

SCORPIONS singer Klaus Meine said in a statement: "We very much regret having to disappoint our fans in the three cities that were next on the schedule of our world tour 2022 and ask everyone who had already secured tickets for their understanding."

Earlier this week, SCORPIONS announced that they will return to North America on the "Rock Believer" world tour with special guests WHITESNAKE on the David Coverdale-fronted outfit's farewell tour.

Fresh off of their sold-out "Sin City Nights" Las Vegas residency, SCORPIONS will kick off a two-month-long Live Nation-produced run of dates on August 14 in Toronto, with additional concerts in Los Angeles, Detroit, Chicago, Dallas, and Denver, among others. In addition to WHITESNAKE, Swedish band THUNDERMOTHER will be joining the tour. Tickets go on sale to the public on Friday, May 13 at 10 a.m. local time on Ticketmaster.com.

Meine told Chile's Radio Futuro that "Rock Believer" is "dedicated to all the rock believers in the world. And we're very excited after all these years. We thought, when you think about all the touring we did the last 10 years, after the release of 'Return To Forever' in 2015, the time was right to go back into the studio, to write new material, to write new songs and check out if the creativity is still working. The big aim was, the goal was to make a rock album — to make an album with lots of attitude, power and focus on the good old times and really enjoy the music and have some fun with the music. And that feels really good."

Posted by Gérard Drouot Productions on Monday, May 9, 2022