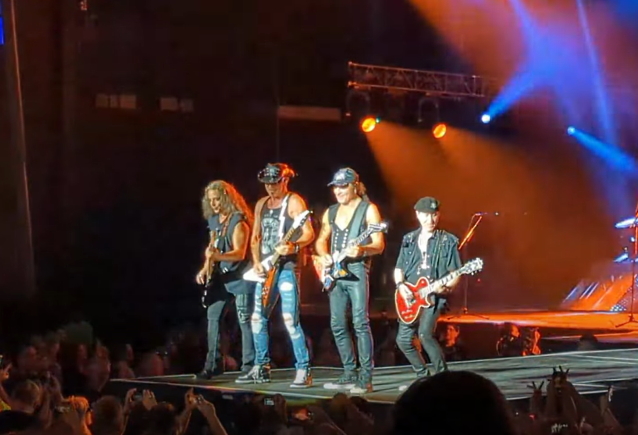 4K HDR "cinema-wide" footage shot at the show can be found below.

According to Rob Ksiadz, who filmed most of the video found at the bottom of this post, originally scheduled support act THUNDERMOTHER "did not perform. Instead, the SCORPIONS had Canadian artist JJ Wilde from Kitchener, Ontario open the show 30 minutes late. There was then further delay before the SCORPIONS took the stage, as lighting warnings from a nearby storm prompted the venue to shelter everyone from lawn seats and 400 section who were outside the venue roof."

SCORPIONS' setlist was as follows, according to Setlist.fm:

Earlier this month, WHITESNAKE pulled out of the North American tour with SCORPIONS due to singer David Coverdale's "continued treatment for a persistent upper respiratory infection."

We were listening to the ‘Wind Of Change’ on this August summer night at #BudStage!

The Rock Believer World Tour with...

Due to impending severe lightening tracking toward the venue, we will be pausing the show until further notice. We...