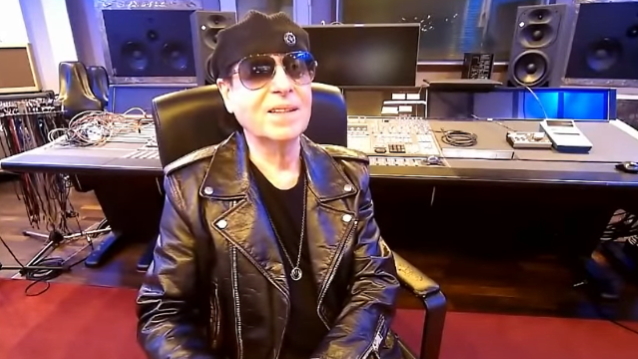 SCORPIONS singer Klaus Meine spoke to AXS TV about his band's upcoming Las Vegas residency, "Sin City Nights". The run of shows, which was originally slated to take place in July 2020 and was later pushed back to May 2021, will now happen in March-April, 2022 at Zappos Theater at Planet Hollywood Resort & Casino.

"We go to Vegas for nine shows, starting at the 26th of March until the middle of April," he said (as transcribed by BLABBERMOUTH.NET). "And we're looking very much forward to that. It's a new show, a new production, and it's nice, for a change, that we don't have to travel every other day, waking up every morning in different cities, different places, different countries and continents. So we stay for quite a while there. It's great not only for the band, but also for the crews."

Asked if it's hard on the body to go back on the road after 50 years of touring, Klaus said: "It's not hard on the body after 50 years; it's harder on the body after two years' break. We never had a long break like this and we know it's quite a challenge to go back on the same level playing shows like we used to. It's two years ago by the time we will be back on the road, and this is something you have to work your body back to this level. Especially for me being the singer, you have to get those little pipes ready to rock and ready to roll, and it's impossible to do it from one day to the other. You have to prepare yourself. And it goes for the whole band."

He continued: "We had the first rehearsals here in the studio playing the new set, putting the new songs in the setlist, and we will have more rehearsal days here in Peppermint Park [studios in Hannover, Germany] before we go to the U.S. But you have to build it up yourself. It will be different. But it will be also, especially going through this pandemic, for all of us — not only for the band, but also for the audience, for our fans — it will be very, very emotional, finally to come together, to enjoy a concert together. It will be different. It will be very emotional, I think."

SCORPIONS' 19th studio album, "Rock Believer", will be released on February 25, The LP was recorded primarily at Peppermint Park Studios in Hannover, Germany and was mixed at the legendary Hansa Studios in Berlin, Germany with engineer Michael Ilbert, who has earned multiple Grammy nominations for his mix work with producer Max Martin on albums by Taylor Swift and Katy Perry.