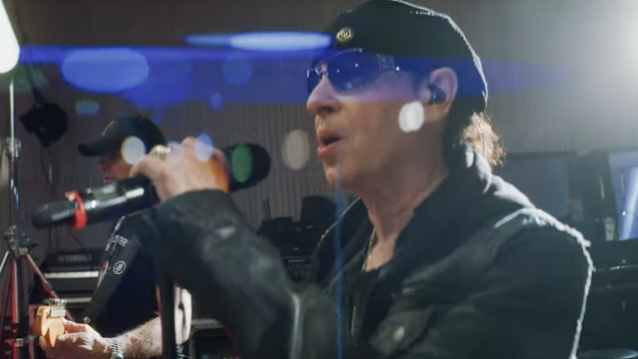 German hard rock legends SCORPIONS have released a performance video for the title track of their new album, "Rock Believer". The footage was filmed at Peppermint Park Studios in Hannover, Germany, where "Rock Believer" was recorded.

Said SCORPIONS in a statement: "We are having a great time rocking in Las Vegas and wanted to share some performances with the rest of you. We recorded 4 tracks from our new album 'Rock Believer' at our studio in Hannover. You can watch the first one, 'Rock Believer'."

"Rock Believer" was released on February 25. The LP was mixed at the legendary Hansa Studios in Berlin, Germany with engineer Michael Ilbert, who has earned multiple Grammy nominations for his mix work with producer Max Martin on albums by Taylor Swift and Katy Perry.

SCORPIONS singer Klaus Meine told Chile's Radio Futuro that "Rock Believer" is "dedicated to all the rock believers in the world. And we're very excited after all these years. We thought, when you think about all the touring we did the last 10 years, after the release of 'Return To Forever' in 2015, the time was right to go back into the studio, to write new material, to write new songs and check out if the creativity is still working. The big aim was, the goal was to make a rock album — to make an album with lots of attitude, power and focus on the good old times and really enjoy the music and have some fun with the music. And that feels really good."