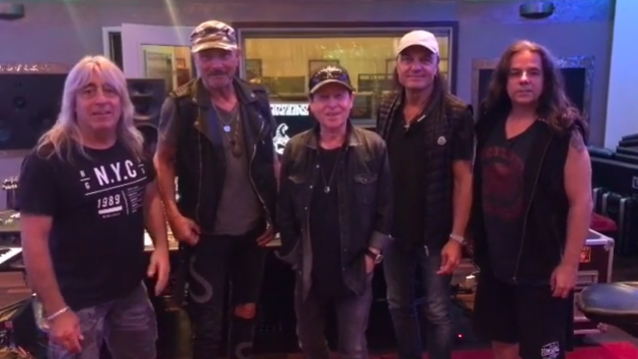 The five members of SCORPIONS have reunited at Peppermint Park Studios in Hannover, Germany to resume work on their upcoming studio album. Tentatively due in 2021, the disc will mark the German hard rock legends' first release since 2017's "Born To Touch Your Feelings - Best Of Rock Ballads", which was an anthology of SCORPIONS' new and classic material.

SCORPIONS originally intended to record the new album in Los Angeles with producer Greg Fidelman, whose previous credits include SLIPKNOT and METALLICA. However, because of the pandemic, most of the work so far had been done remotely, with Fidelman taking part via Zoom.

Earlier today, SCORPIONS posted a short video message from Peppermint Park, letting their fans know that they have finally been able to come together as a band and work on the new LP in a more traditional way.

In the clip, which can be seen below, frontman Klaus Meine said: "Hi everybody out there. We are the SCORPIONS. Believe it or not, after all these months, we are all together here in Hannover. We're joined in the studio, at Peppermint Park. And we're very excited to be all back together in one room and to keep going with this new record. It feels great that the band finally rejoined forces.

"We just want to let you know it's all good in the SCORPIONS camp, and we're excited to make a new album. And, of course, hopefully we see all of you next year on the road, wherever it is.

"Take care of yourselves, stay well and safe, and we love you."

Meine recently told Talking Metal that the goal with using Fidelman to produce the new LP is to bring "the old vibe from albums like 'Blackout', 'Love At First Sting' or even 'Lovedrive'. We try to focus on those albums and this attitude," he said. "If we get there, who knows — it's so many years later. But it's the spirit and it's the whole vibe around this album. This time, the focus is on the harder songs."

According to Meine, SCORPIONS' new LP will feature "no outside writers at all," unlike 2015's "Return To Forever", which was largely co-written by the album's producers, Mikael Nord Andersson and Martin Hansen.

Fidelman began his career as the guitarist and songwriter for RHINO BUCKET before launching his career as a producer, engineer and mixer, finding an early mentor in Rick Rubin.