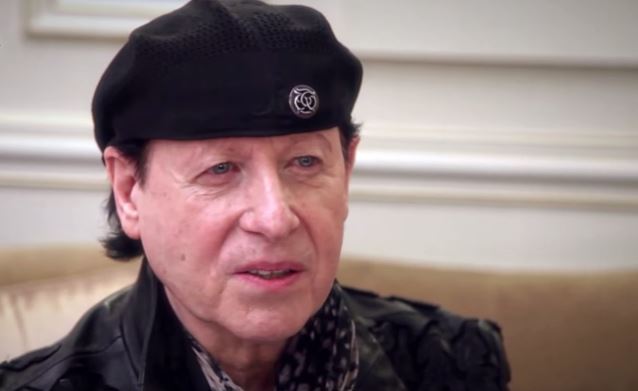 Sally Steele, CEO, founder, publisher and editor in chief of Vegas Rocks! magazine, recently conducted an interview with singer Klaus Meine of German hard rock veterans SCORPIONS. A couple of exceprts from the chat follow below.

On whether there was anything in the band's long, fifty-year history that he might have done a little differently now that he looks back:

"There is nothing, really, we could have done differently. The great thing is we had a chance to — like [we sing] in the song 'We Built This House' — to build up our career, brick by brick, and [through] all those storms the windows were shaking and the house was shaking, but the SCORPIONS, we learned by doing [it], and we went up step by step on this ladder. And it was all about music and delivering on stage and playing in front of the fans. It was not so much about becoming a superstar or whatever — it was about being up on stage and really delivering a great show every night. This is what it's all about, and that we still can do this even after fifty years. We're getting older and it's an ugly number — 5-0 — I think, but we're still young at heart, and to see all those young kids in front of the stage who have joined the party in the last couple of years, it's exciting to play in front of new generations and to see and realize that our music became timeless. That's simply wonderful."

On the biggest lesson he learned in his music career:

"Well, I think it's very important that you believe in yourself and that you make sure it's not all about business; it's about the passion for music, it's about friendship, it's about chemistry in a band. That's very important, you know. And you've gotta be honest to yourself. And you're very lucky if you find the right people in the right moment in your life and you have a chance for something like a long career. And you always have to follow that path and try to be true to yourself and, well, enjoy life. And even when sometimes it all goes downhill, there might be the right moment where there's some light at the end of the tunnel and you'll be back again. And this is what we went through. You have to be patient, and you have to be patient to wait for the right moment, and everything will be cool. But you just have to believe in yourself, and don't give up too early."

On whether SCORPIONS' 50th-anniversary tour will be the band's real "farewell":

"After we did the [last] 'farewell' tour, we really don't wanna talk about another farewell tour. We don't wanna make any predictions for the future whatsoever. Because, I mean, we lost some close friends in the last couple of months. Our manager, Peter Amend, it's almost a year ago he's gone, and our tour manager, Michael Gehrke, passed away earlier this year, so we went through some tough…. last couple of months. At the same time, we were making this record and we're back on the road and everything. But you realize that it can be all over just tomorrow — you know, you just realize. When something like this happens — a real tragedy — you don't take anything for granted anymore. So we enjoy the day, we enjoy what we're doing, but you never know. So no predictions. We're here right now, and we enjoy, and when we come to America, we wanna give our fans a great show and not too much thinking about what might be next year, what might be 2017. I know about 2018, so I will be 70. That's scary. I wanna say… I watching THE ROLLING STONES last year here in Germany, in Berlin, and next to me was Steven Tyler [AEROSMITH], and Steven and me were watching Mick Jagger — he was dancing and going totally crazy. And I said to Steven, 'Look, Steven, this guy is 70 now. Isn't that amazing?' And Steven Tyler went, 'Klaus, I'm 66!' And I said, 'Well, me too, man.' So all of us are growing older, but we're still out there with the same passion. And I guess we're young at heart, and we get so much energy from the audience, from the fans, and that's a great thing."

A special one-night national screening event of SCORPIONS' first theatrical release, the documentary film "Forever And A Day", is scheduled for on Wednesday, October 14. Presented by SpectiCast and Tempest Films, "Forever And A Day" captures the history of one of the most influential bands in music history — following them for 18 months with an insightful look into the dynamic that has kept them at the top of the metal community. Filmmaker Katja von Garnier accompanied the SCORPIONS on their "Final Sting" dates — originally the band’s farewell tour around the globe, from Bangkok via Los Angeles to Moscow. The resulting documentary, "Forever And A Day", is a moving portrait of their unique history, packed with candid moments and SCORPIONS' memories, culminating with the decision to scrap their retirement plans.

For more information on locations and tickets, go to this location.

SCORPIONS' "Return To Forever 50th Anniversary Tour", featuring longtime members Klaus Meine, Rudolf Schenker and Matthias Jabs, alongside James Kottak (drums) and Paweł Mąciwoda (bass),kicked off in May 2015 with dates on four continents. For these milestone shows, SCORPIONS have built a career-spanning setlist of their hits, anthems, ballads and vintage classics. 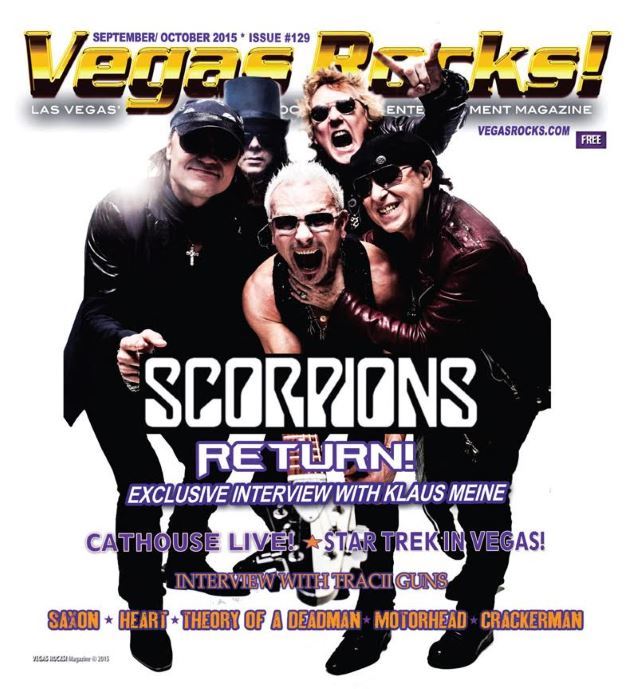